Items related to Beggars of Life: A Hobo Autobiography

Beggars of Life: A Hobo Autobiography 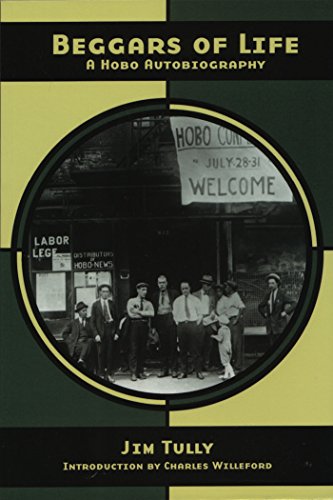 A bestseller in 1924, this vivid piece of outlaw history has inexplicably faded from the public consciousness. Jim Tully takes us across the seamy underbelly of pre-WWI America on freight trains, and inside hobo jungles and brothels while narrowly averting railroad bulls (cops) and wardens of order.

Written with unflinching honesty and insight, Beggars of Life follows Tully from his first ride at age thirteen, choosing life on the road over a deadening job, through his teenage years of learning the ropes of the rails and -living one meal to the next.

Jim Tully (1891 1947) was a best-selling novelist and popular Hollywood journalist in the 1920s and ’30s. Known as "Cincinnati Red" during his years as a road-kid, he counted prizefighter and publicist of Charlie Chaplin among his many jobs. He is considered (with Dashiel Hammett) one of the inventors of the hard-boiled style of American writing.

In Oakland, California on March 24, 2015 a fire destroyed the AK Press warehouse along with several other businesses. Please consider visiting the AK Press website to learn more about the fundraiser to help them and their neighbors.

Jim Tully (1886–1947) was born in St. Marys, Ohio. He is the author of numerous books chronicling the American underclass, including Circus Parade (1927; The Kent State University Press, 2009), Shanty Irish (1928; The Kent State University Press, 2009), Shadows of Men (1930), and Blood on the Moon (1931). Paul J. Bauer is a used and rare book dealer in Kent, Ohio. He is the coauthor of Frazier Robinson’s autobiography, Catching Dreams: My Life in the Negro Baseball Leagues (1999). Mark Dawidziak has been the television critic at the Cleveland Plain Dealer since 1999. A theater, film, and television reviewer for about thirty years, his many nonfiction books include The Barter Theatre Story: Love Made Visible (1982), The Columbo Phile: A Casebook (1989), Mark My Words: Mark Twain on Writing (1996), The Night Stalker Companion: A 25th Anniversary Tribute (1997), Horton Foote’s The Shape of the River: The Lost Teleplay about Mark Twain (2003), and The Bedside, Bathtub & Armchair Companion to Dracula (2008). He is also a novelist and a playwright.

"The best book of its kind I have ever encountered. Thirty-one strange chapters, and all of them good." -- H. L. Mencken

1. Beggars of Life: A Hobo Autobiography

2. Beggars of Life: A Hobo Autobiography

Shipping: US$ 4.20
From United Kingdom to U.S.A.
Destination, rates & speeds

3. Beggars of Life: A Hobo Autobiography

4. Beggars of Life: A Hobo Autobiography