Items related to Unshook Till the End of Time: A History of Relations...

Alston, Robert John; Laing, Stuart Unshook Till the End of Time: A History of Relations Between Britain & Oman 1650 - 1970 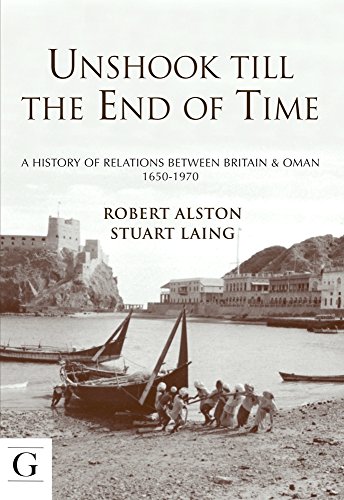 The 1650 treaty agreement between Oman and Britain declared that the bond between the two nations should be "unshook to the end of time." It was an ambitious goal, but whatever the political ups and downs, a remarkable relationship endures to this day, charted here in this authoritative history by two former British Ambassadors to Oman.

Laing and Alston, both former British Ambassadors to Oman have researched their subject closely, assembling an authoritative history which runs from the earliest contacts in the mid-17th century through to the end of the Dhofar wars in 1975. Their research sheds new and clearly documented evidence on how events unfolded over the past fifty years. This landmark book will be vital to all historians of the region and to analysts of the current geopolitical situation in the Persian Gulf.

Stuart Laing was British Ambassador to Oman (2002—2005) and Kuwait (2005—2008) before moving into academia and taking on the role of Master at Corpus Christi College, Cambridge. His wife, Sibella Laing, a fellow Cambridge graduate, played a central role in the research and preparation of material for this book. Robert John Alston, CMG, QSO, DL served as British Ambassador to Oman from 1986-1990 before going on to become British High Commissioner to New Zealand and subsequently Governor to the Pitcairn Islands.

Shipping: US$ 6.78
From United Kingdom to U.S.A.
Destination, rates & speeds