Items related to Panzergrenadiers to the Front!: The Combat History... 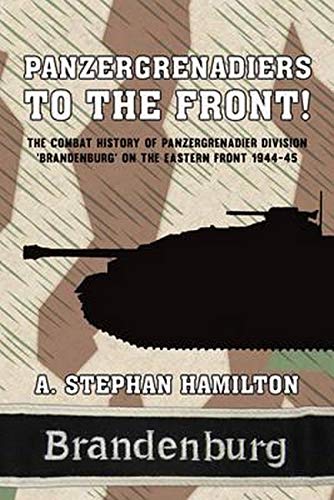 "Panzergrenadiers to the Front!" is the first in-depth look at the enigmatic Panzergrenadier-Division ‘Brandenburg’ formation and its five-month combat career along the Eastern Front at the end of the Second World War. This book draws on the previously unpublished personal accounts by more than a dozen division veterans, and is supplemented by extensive use of new primary documents and relevant secondary German, Polish, and Soviet source material. While this book represents the most thorough and accurate treatment of Panzergrenadier-Division ‘Brandenburg’ published to-date, it also provides extensive coverage of Heeresgruppe Mitte and 4. Panzer-Armee operations.

The new Panzergrenadier-Division ‘Brandenburg’ was forged in December 1944 from the nucleus of burnt-out commando regiments and the remnants of a half-dozen conventional units supplied by the Ersatzheer. Panzergrenadier-Division ‘Brandenburg’ entered the frontline a month later where it fought in some of the most dramatic and relatively unknown late war battles in Poland, Silesia, Saxony, and Czechoslovakia. The desperate fighting at places like Kutno, Raudten, Primkenau, Niesky, Bautzen, Olmütz and elsewhere is told through the words of the men who fought there. Revealed for the first time is the role of ‘Brandenburg’ in the last operational Wehrmacht victory of the war that destroyed the Soviet 7th Guards Mechanized Corps, defeated the 2nd Polish Army, and spared Dresden from immediate capture.

The raw, emotional, accounts by ‘Brandenburg’ veterans shed new light on to the day-to-day operations of the Wehrmacht during the war’s chaotic final months. Readers will experience the routine of frontline life, the despair of defeat that caused some to attempt suicide, and the euphoria of survival, with corks popped on champagne bottles to celebrate another day alive. The uncertainty of unconditional surrender drove many in ‘Brandenburg’ to continue to fight amidst the certainty of a war they knew. In the words of Major Kurt Steidl: ‘I found out on the radio in the morning that our Führer had died in Berlin. All of us knew what that meant for us. Should we surrender for that reason like miserable cowards after years of struggle against forces many times our size? No! And again no! Now more than ever, they shouldn't have it easy with us old hands. We would prove that.’

"Panzergrenadiers to the Front!" is a compelling narrative of the often brutal combat of war’s end.

About the Author:
Aaron Stephen Hamilton has spent the last twenty-five years researching and analyzing the final year of military conflict during World War II in Europe. He is an academically trained historian who holds a Bachelors and Master's degree in History, as well as the Field Historian designator awarded by the U.S. Army's Combat Studies Institute. His multi-volume, The Oder Front 1945 became the basis for the U.S. Army Europe's first Staff Ride and Battle Book regarding the battle of the Seelow Heights.
Review:
An extraordinary account of the Panzergrenadier division and the part it played in the conflict on the Eastern Front during the Second World War, based on personal reminiscences of men who were actually there." (Books Monthly)
"This book is what I call a keeper, it will stay on my bookshelf for me to dip in and out of for the rest of this year. 5 stars." (ARRSE (Army Rumour Service))
"This is the first book to take a deep look at the famous Panzergrenadier-Division 'Brandenburg' from its formation and its five-month campaign in the Eastern Front at the end of the Second World War... I found this book fascinating and made me aware of a lot of facts I have never heard before... I recommend this book to everyone with a deep interest in the late part of the war on the Eastern Front" (IPMS/USA)