Items related to The Great Bike Race: The classic, acclaimed book that...

Nicholson, Geoffrey The Great Bike Race: The classic, acclaimed book that introduced a nation to the Tour de France

The Great Bike Race: The classic, acclaimed book that introduced a nation to the Tour de France 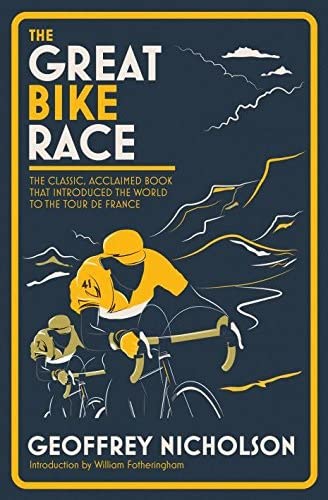 "If Alpe d’Huez was a rigorous climb, with its mathematical progression of tight corners and steep inclines, the Izoard is far more awesome, a rocky wilderness at 7,743 feet, which needs only a few bleached skulls at the roadside to complete its sense of desolation."

Geoffrey Nicholson’s The Great Bike Race is universally revered by modern cycling critics as the benchmark English-language volume of the sport and has risen to mythical status. It was the first book in English to tell the entire story of a full tour and truly captivates the reader from start to finish. Nicholson’s classic, vivid descriptions of the racing, the personalities, tactics and intrigues of the 1976 race are rotated with insightful thematic chapters where he lifts the lid on the broader culture and lengthy traditions of cycling’s most famous race and the greatest annual sports event in the world.

On the 40th anniversary of the race and original first publication, Velodrome Publishing is most honored to republish and celebrate this seminal cycling tome as the launch volume in the ‘Vintage Velodrome’ series of titles.

Geoffrey Nicholson was one of the most original, prolific and best-liked sports writers of the past 50 years. A modest, unassuming man, he was part of a small team at The Observer, who transformed the character of sports journalism in the late 1950s by eschewing tabloid clichés and public relations hype and introducing a quality of writing that matched, and was sometimes superior to, that on the arts and foreign pages. He was to become sports editor of the Observer and the Sunday Correspondent, sports features editor of the Sunday Times amd rugby correspondent of the Independent. Geoff’s main interest was cycling, and he covered the Tour de France for 20 years. He has the distinction of being the first editor to publish a sports picture by Eamonn McCabe. Geoffrey Nicholson died in August 1999.

“This is unquestionably the finest book ever written on the subject of cycling, bar none. the combination of the late Geoffrey Nicholson's (he died in 1999) observations, coupled with an impeccable writing style, make “the great bike race” almost a complete education in and of itself” (The Washing-Machine Post)

It's one of the best books of cycling ever written. For people starting adventure with cycling will be a great and colorful guide to the nuances of the sport, and those more familiar, there are many interesting stories from the old days. This combined with the excellent pen Nicholson creates an unusual atmosphere of "The Great Bicycle Race". A must have! (Rowery.Org)

"The Great Bike Race remains, in my eyes, the finest book ever written about the Tour De France." (William Fotheringham)

"The quality of his writing has transformed the character of sports writing’." (The Guardian)

"If there were a maillot jaune for sportswriters, Mr Nicholson should be wearing it." (The Economist)

"A delightful and perceptive book.....his greatest success is in his wonderfully vivid ability to describe the passing scene, whether witnessed from the grandstand of a stadium, from a café terrace in a small mountain hamlet, or from the bedrooms of the participants and the armies of their assistants.....Mr Nicholson is very good indeed." (The Times)

1. The Great Bike Race: The classic, acclaimed book that introduced a nation to the Tour de France

2. The Great Bike Race: The Classic, Acclaimed Book That Introduced a Nation to the Tour De France

3. The Great Bike Race: The Classic, Acclaimed Book That Introduced a Nation to the Tour De France