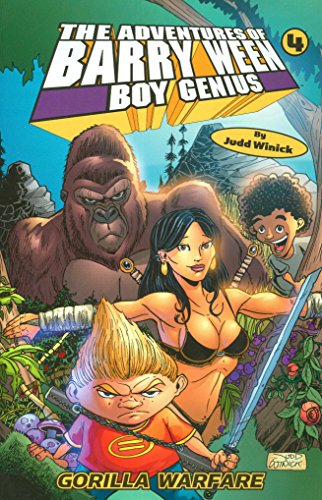 What's more fun than a barrel full of monkeys? Why, Barry Ween, of course! For the uninitiated, Barry Ween is the smartest boy the world has ever seen. There's just one problem. No one can know. If word got out about his big brain it could land Barry, his family, and his best friend Jeremy (his sole confidant) in a heap of trouble. But when you're a boy genius, keeping the 'rents, the government, and the public at large in the dark is easier said than done! Mutated baby-sitters, talking gorillas, and a strangely familiar warrior woman from another dimension all put Barry's massive intellect to the test and make his big secret that much harder to keep! Gorilla Warfare collects issues #4-6 of the recent Monkey Tales mini-series, and faces the foul-mouthed ten-year-old off against his biggest challenge yet, with hilarious results!

Judd Winick is best remembered as a cast member of MTV`s The Real World III, but he quickly earned a reputation as a gifted cartoonist with his work on the syndicated newspaper comic strip Frumpy The Clown. The Adventures Of Barry Ween, Boy Genius trade paperback collections have been a perennial top-sellers for Oni Press. Winick is the author of the graphic novel Pedro & Me about his experiences on The Real World and as an AIDs lecturer, published by Henry Holt. It earned him his third Eisner Nomination this year, was awarded four honors from the American Library Association (including a Sibert Award Honor), voted Best Children`s Book from Bay Area Book Reviewer`s Association, and dubbed one of the best books of 2000 by PUBLISHERS WEEKLY. He was also nominated for a 2001 Eisner for Best Writer/Artist--Humor for his work on Barry Ween.

Book Description Trade Paperback. Condition: New. Mockingbird Books has two brick and mortar used book stores located in Sebastopol and Guerneville California. We carefully inspect all our books for condition. You can trust our listing is accurate and all our offerings are correctly assessed. Seller Inventory # 116599

THE ADVENTURES OF BARRY WEEN, BO