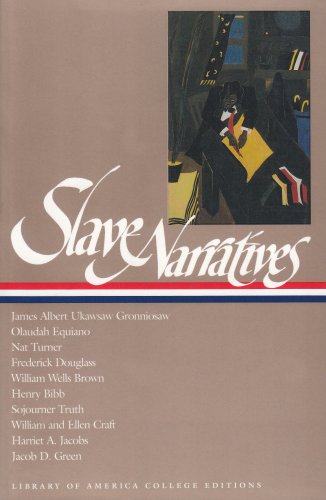 The ten works collected in this volume demonstrate how a diverse group of writers challenged the conscience of a nation and laid the foundations of the African American literary tradition by expressing their in anger, pain, sorrow, and courage.

Review:
The prestigious Library of America series now includes a volume featuring 10 of the most important slave narratives in African American history. Edited by English professor William L. Andrews of the University of North Carolina and Harvard University's Henry Louis Gates Jr., Slave Narratives tells the true story of American slavery and freedom through the voices of the slaves themselves. These voices, which span from 1772 to 1864, portray an astonishing unity in diversity: from the African-born accents of James Albert Ukawsaw Gronniosaw and Olaudah Equiano to the deadpan humor exhibited by J.D. Green on the eve of the Emancipation Proclamation of 1865. "The Narrative of Frederick Douglass" illuminates what life was like for fugitive slaves, while "The Confessions of Nat Turner" rekindles the flames of the slave revolt. Sojourner Truth's story reflects the revolutionary Christianity that fueled the abolitionist movement and Harriet Jacobs's "Incidents in the Life of a Slave Girl" documents the black woman's dual fight against sexual and racial conquest. All told, these works of literature are as important to the American principles of freedom and democracy as the Constitution and the Bill of Rights. --Eugene Holley Jr.
From the Publisher:
The Library of America is an award-winning, nonprofit program dedicated to publishing America's best and most significant writing in handsome, enduring volumes, featuring authoritative texts. Hailed as "the most important book-publishing project is the nation's history" (Newsweek), this acclaimed series is restoring America's literary heritage in "the finest-looking, longest-lasting edition ever made" (New Republic).