Items related to Uriel's Machine: Uncovering the Secrets of Stonehenge,...

Uriel's Machine: Uncovering the Secrets of Stonehenge, Noah's Flood and the Dawn of Civilization 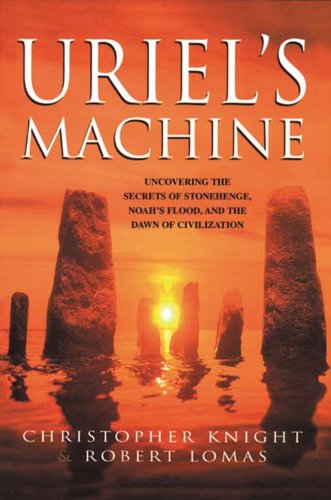 Modern scientific investigations show that Earth has been hit many times by objects such as comets and meteorites. Laboratory work on comet impact effects demonstrates that comets could cause tidal waves to exceed three miles tall and near 400 miles per hour. In the last 10,000 years, there have been two impacts of such proportion: a seven-fold impact into all the world's oceans around 7640 B.C., and a single impact into the Mediterranean Sea about 3150 B.C., the time of Noah's Flood.

Uriel's Machine proves ancient Europeans not only survived the 7640 B.C. flood, but developed a highly advanced civilization dedicated to predicting and preparing for future meteoric impacts. Building an international network of sophisticated astronomical observatories, these ancient astronomers created accurate solar, lunar, and planetary calendars, measured the diameter of the Earth, and precisely predicted comet collisions years in advance. This was the true purpose of megalithic structures such as Stonehenge. In 3150 B.C., the ancients' predictions proved true, and their device -- Uriel's Machine -- allowed the reconstruction of civilization in a shattered world.

Uriel's Machine also presents evidence that:
-There was a single global language on Earth
-A single female was a common ancestor to all living humans
-Angels bred with human women to create The Watchers, giant half-human beings
-The oral tradition of Freemasonry records real events

A fascinating study of humankind's past, present, and future, Uriel's Machine proves the world was indeed flooded, but survived wholly due to these ancient Europeans, their heavenly knowledge, and one remarkable machine.

The last few years have seen literally dozens of books challenging our beliefs about history and archaeology, each of them seeking to show that the past was quite different from what standard books tell us. With Uriel's Machine, Christopher Knight and Robert Lomas move away from their previous books about the Knights Templar, the Freemasons, and the strange chapel at Rosslyn in Scotland, and turn their attention instead to the much more distant past. The authors believe that Earth was hit by a comet in 7640 B.C., and by another one in 3150 B.C., each time resulting in great devastation. From their study of Stone Age monuments around Britain, and of the nonbiblical Book of Enoch, they conclude that Enoch visited Britain some time before 3150 B.C. to learn how to construct a megalithic celestial calculator that, amongst other things, could be used to forecast the arrival of comets. In the end, of course, there can be no absolute proof of this or any other rewriting of history--or indeed of more orthodox versions of history. Knight and Lomas's conclusions are controversial, but that in itself is no bad thing. Existing paradigms in every discipline should be challenged, and this is what they are doing. --David V. Barrett, Amazon.co.uk

What was the true purpose of the great megalithic sites in Western Europe? In this international bestseller, the authors question the standard views of history and the development of science. They show how, in megalithic times, a civilization emerged able to build an international network of sophisticated astronomical observatories. Further, they show that recently revealed Dead Sea Scroll texts contain precise details on the building of a machine in the reconstruction of a shattered world.

1. Uriel's Machine: Uncovering the Secrets of Stonehenge, Noah's Flood and the Dawn of Civilization

2. Uriel's Machine: Uncovering the Secrets of Stonehenge, Noah's Flood and the Dawn of Civilization

3. Uriel's Machine: Uncovering the Secrets of Stonehenge, Noah's Flood and the Dawn of Civilization Knight, Christopher and Lomas, Robert

4. Uriel's Machine: Uncovering the Secrets of Stonehenge, Noah's Flood and the Dawn of Civilization Knight, Christopher and Lomas, Robert