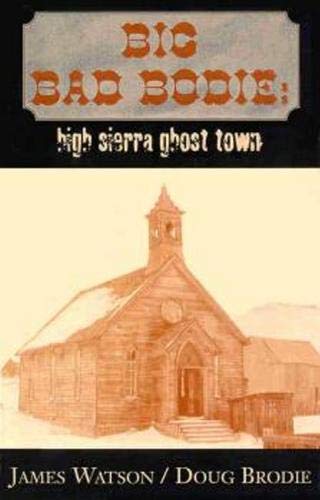 Bodie, California is the most well-preserved ghost town in the West. It is also a State Historic Park located at an altitude of 8,369 feet (a mile-and-a-half up), five miles from the California-Nevada border. The town reached a population of 10,000 in its heyday, from 1877 through 1882, and gold and silver production topped 100 million dollars, based on today's prices. Bodie consists of 175 buildings kept in a state of arrested decay by the State, meaning they will never be restored, but are prevented from further deterioration through a system of constant repair. As is the case with many ghost towns of the West, questions, mysterious circumstances, puzzling episodes, previously unexplained events and enigmas surround Bodie. In their fascinating new book Big Bad Bodie, authors Watson and Brodie have endeavored to solve these puzzles and provide answers to questions, such as:Who is really buried in Bill Bodey's grave, and why? Why is the name of the town spelled BODIE, when the town's namesake spelled his name BODEY? Why will there never be gold mining in Bodie again? Who started the 1932 fire that burned down much of the town? Big Bad Bodie: High Sierra Ghost Town is the first new book about Bodie to come along in more than two decades and includes 60 photos, many from the lens of Watson's camera, plus numerous illustrations. Brodie and Watson have written a rich and fascinating history of a notorious California ghost town, sure to be of interest to any reader.

Doug Brodie is retired from the City of Stockton, California, where he served 23 years as an administrator. He served in the U.S. Navy in 1945-46, and although he is not a flier, he has always had a keen interest in the field of aviation. He is also author of Big Bad Bodie: High Sierra Ghost Town.