Items related to STALKING THE TRICKSTERS 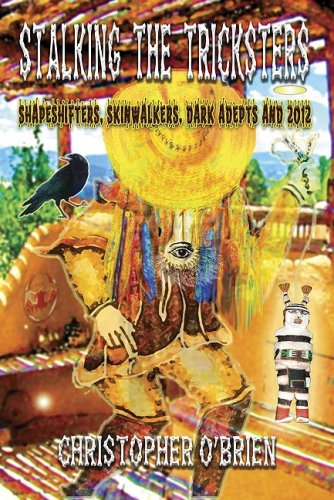 The subject of Trickster-ism has permeated human belief for millennia but today, in the 21st Century, very little is publicly known about "The Trickster." Graced by many names including; fool, sage, coyote, Loki, men-in-black etc., tricksters have inhabited culture for millennia and this casual force has played pivotal roles throughout history. Author/field-investigator Christopher O'Brien redefines this hidden subject of "tricksters" from a new, fresh perspective and he begins a journey down to the enchanted southwest desert to study the many elusive tricksters of North American indigenous myth and lore. He quickly realizes, that for millennia, tricksters have been shrouded world-wide behind many guises such as skinwalkers, shapeshifters jokers, loki, jinn, sorcerers, witches and other dark adepts. And that they have burrowed deep inside human belief into the core of human culture. Cryptids, elementals, werewolves, vanishing hitchhikers, demons and dancing devils have been reported around the world for generations. But why? What are these forces? What is their agenda? O'Brien journeys out into the field to determine whether these phenomenal masks worn by the tricksters can provide us a direct conduit to the unknown today in the 21st Century. Could it be that these denizens of phenomenal events may be attempting to communicate a warning to humanity in this uncertain age of prophesized change? Reporting from places such as the Navaho, Apache and Hopi Reservations of Arizona, the four sacred mountains of the Four Corners, Mexico's bizarre Zone of Silence and the Temple of the Inscriptions at Palenque in the Chiapan Highlands. O'Brien uncovers intriguing accounts that suggest there are beings walking among us able to utilize fantastic abilities. He realizes that subtle, deeply ingrained beliefs regarding these dark adepts with wild talents have subtly shaped cultural belief around the world for generations and today, these fantastic creatures continue to instill fear and awe. These adepts have been manipulating as he tackles, redefines and examines the mysterious world of the tricksters.

For thirteen years, Christopher O'Brien investigated and researched the mysterious San Luis Valley (CO/NM), one of America's most anomalous regions, and his Mysterious Valley book series and numerous TV appearances have been appreciated by millions. After his years spent in the field chasing UFOs, Bigfoot, prairie dragons and other fantastic trickster-like phenomena, he wonders, "are these tricksters using knowledge of collective superstition to inhabit and manipulate the modern world?" Recently he was on the UFO Hunters television show.