Items related to Understanding Arabs: A Guide for Modern Times 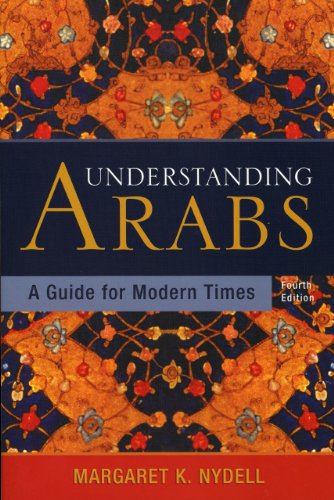 Now more than ever, Margaret Nydell's book Understanding Arabs is a must-read.The fourth edition of this classic introduction to Arab culture has been completely revised and updated to help readers understand the complex issues playing out on the world stage. Understanding Arabs: A Guide for Modern Times is a handbook accessible to everyone. Written by the highly esteemed academic Margaret Nydell, the book promotes understanding between modern-day Arabs and Westerners without pushing a political agenda. Updated to include the complex global issues going on today, new chapters include information about Islamic Fundamentalism, anti-Americanism and an updated and expanded chapter on Arabs and Muslims in the West. Contents A Message From the Authors Map of the Arab World Preface Introduction: Patterns of Change 1 Beliefs and Values 2 Friends and Strangers 3 Emotion and Logic 4 Getting Personal 5 Men and Women 6 Social Formalities and Etiquette 7 The Social Structure 8 The Role of the Family 9 Religion and Society 10 Communicating with Arabs 11 Islamic Fundamentalism (Islamism) 12 Anti-Americanism 13 Arabs and Muslims in the West 14 The Arab Countries: Similarities and Differences Conclusion Appendix: The Arabic Language End Notes Bibliography and References Index About the Author

"For [more than] 15 years, Margaret Nydell’s Understanding Arabs has been used by countless Americans preparing to work or live in the Arab World. It is a unique source; there is nothing like it. Written with wit as well as seriousness, it provides a sound cultural appreciation as well as basic data on the region. Her personal message regarding the tragic events of September 11 should be required reading by all who make decisions or write commentary on the Arab world." —Max L. Gross, Joint Military Intelligence College

"This is an important and fascinating book, especially for Americans in this crucial time in U.S.-Arab relations. Dr. Nydell presents a timely, lucid, and engaging guide to the values and cultures of the Arab World, based on her many years of working and living there and on her training as a professional linguist. This candid and wonderfully readable book captures the contrasts and the characteristics of this great civilization and brings them vividly to life for a Western audience." —Karin Ryding, Ph. D, Sultan Qaboos bin Said Professor of Arabic, Chair of the Department of Arabic Language, Georgetown University

"Ever wonder what the Arabs are thinking? Understanding Arabs offers both an analysis and a perspective that are in great demand. This book covers what the media typically overlook and what is necessary to make some sense out of what is going on. We have relied on this source of cultural information for many years. I have found no other book in English to be so useful." —Colonel Terrence M. Potter, US Military Academy

"Middle East specialists have long relied on their worn copies of Understanding Arabs for insights about Arab social behavior. A whole generation of U.S. diplomats were introduced to the subject by Dr. Nydell. In this concise and practical guide, she shares her wealth of scholarly and real-world experience, and she does so without the psycho-babble that too often dominates other surveys of the subject." —Ambassador David L. Mack, Vice President, Middle East Institute, Washington, D.C.

"Among other things the events of September 11 dramatized our ignorance as Americans about Arabs and Islam. This book helps to fill that void by exploring the enormous misconceptions we hold about each other. A must book for all!" —Alvino E. Fantini, Former President, SIETAR International Senior Faculty, School for International Training, Brattleboro, VT

Diplomats, scholars, business people, travelers and those who wish to understand the complex events playing out on the world stage have relied on Margaret Nydell’s ground-breaking work. Understanding Arabs has become an essential guide to comprehending an immensely varied and often-misunderstood culture. This much-awaited fourth edition brings contemporary Arab culture into sharp focus. Concise and objective, Understanding Arabs covers beliefs and values; religion and society, the role of the family; friends and strangers; the dynamic between men and women; and social norms and communication styles—all with an eye toward the diversity that this rich culture represents.

UNDERSTANDING ARABS: A GUIDE FOR