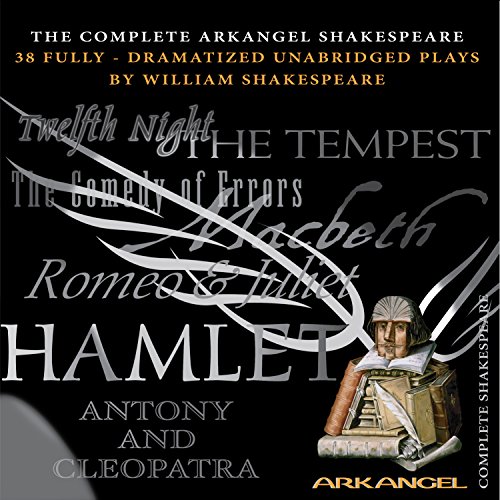 For the first time in audio publishing history, all of Shakespeare's plays are available in one extraordinary, definitive collection. Based on ''The Complete Pelican Shakespeare'', here are all of the master's 38 plays, complete and unabridged, fully dramatized on CDs with an original score and sound design for each play.

A monumental project that spanned five years and cost $3 million, ''The Complete Arkangel Shakespeare'' represents the collective vision of four people: Shakespeare scholar Tom Treadwell, film producer Bill Shepherd, BBC director Clive Brill, and composer Dominique Le Gendre. Together they have assembled the 400 great actors of the British theater and produced a landmark digital recording with a sophisticated layering of sound that immerses the listener in Shakespeare's world.

William Shakespeare (1564-1616), English poet and dramatist of the Elizabethan and early Jacobean period, is the most widely known author in all of English literature and often considered the greatest. He was an active member of a theater company for at least twenty years, during which time he wrote many great plays. Plays were not prized as literature at the time, and Shakespeare was not widely read until the middle of the eighteenth century, when a great upsurge of interest in his works began that continues today.

This dramatization is strongest at the strangest and most intense moments of this great tragedy. When Macbeth meets the weird sisters, when Lady Macbeth reveals her soul in a monologue, or when the forces clash in battle, this dramatization is hypnotic. The performances are first rate, and the sound quality is varied and nicely layered; each character speaks in a different cadence, with some difference in accent, and multiple background sound effects (a horn, the wind) combine to suggest a lively world without obscuring the core dialogue. However, the more mundane moments-the planning, the consideration-are harder to follow, and harder to care about, with no actors to watch. G.T.B. [Selection from The Complete Arkangel Shakespeare set.] © AudioFile 2004, Portland, Maine-- Copyright © AudioFile, Portland, Maine

Book Description AudioGO 2003-03-31, 2003. Audio CD. Condition: Good. Item is in good condition. Some moderate creases and wear. This item may not come with CDs or additional parts including access codes for textbooks. Might be an ex-library copy and contain writing/highlighting. The dust jacket might be missing. Seller Inventory # DS-1932219005-3