Items related to THE ELEMENTARY COMMON SENSE OF THOMAS PAINE: An Interactive...

Wilensky, Mark THE ELEMENTARY COMMON SENSE OF THOMAS PAINE: An Interactive Adaptation for All Ages

THE ELEMENTARY COMMON SENSE OF THOMAS PAINE: An Interactive Adaptation for All Ages 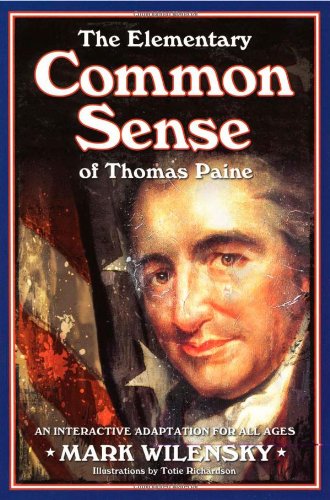 Few books or pamphlets have had as much influence on the course of human history as Thomas Paine’s Common Sense. The Declaration of Independence severed political bonds with England, but it was Paine’s dynamic pamphlet that conceptualized the idea of unity and freedom months before Thomas Jefferson put pen to parchment. Paine’s publication energized a vast number of colonists to embark on a long and bloody war that imperiled their livelihoods and dismantled their cultural identity-all in the hope of creating a new nation constructed upon the concepts of liberty and independence.

Although many people know of Tom Paine and his famous Common Sense, the historic pamphlet has not been readily accessible or widely read. But it needs to be, because it is one of our nation’s most important founding documents.

Fifth-grade history teacher Mark Wilensky rectifies this oversight with the publication of The Elementary Common Sense of Thomas Paine: An Interactive Adaptation for All Ages. This remarkable interactive version is adapted for young and old alike, and makes Paine’s words and the concepts he espoused widely available to everyone.

Wilensky’s interactive Common Sense offers a rich array of colonial history sprinkled with audio, video, and text graphics linked to a dynamic online website. This adaptation includes the original Common Sense, a new adapted version in plain language everyone can understand today, an extensive chronology of important pre-revolutionary events leading up to the publication of Paine’s pamphlet, and adapted versions of the Olive Branch Petition, A Proclamation For Suppressing Rebellion And Sedition, and the Boston Port Act. Wilensky also includes a wide variety of insights on colonial coins and mercantilism, and many humorous illustrations designed to convey the important concepts of independence and liberty.

Instructors and parents will especially appreciate Wilensky’s decision to include supplementary materials such as teaching plans for classroom and home schooling use. These include a wide variety of activities to engage students, all based on National Curriculum Standards.

Colonial America was a continent with multiple cultures and customs spanning vast geographic distances. Tom Paine’s amazing persuasive essay Common Sense unified these seemingly conflicting characteristics into the most remarkable nation ever founded in the history of mankind. The Elementary Common Sense of Thomas Paine will reignite the ardor of our Founding Fathers for a new generation.

Mr. Wilensky is a fifth-grade teacher in Jefferson County, Colorado, where he has been accused of teaching his Colonial America and Revolutionary War classes with enthusiastic zeal. Mark holds a Masters Degree in Curriculum and Instruction. He has taught expelled and court-ordered students in coordination with the District Attorney's Office, and is currently working with the Colorado Department of Education on a national study to find ways to eliminate gaps in education for homeless and highly-mobile children.

1. THE ELEMENTARY COMMON SENSE OF THOMAS PAINE: An Interactive Adaptation for All Ages

2. THE ELEMENTARY COMMON SENSE OF THOMAS PAINE: An Interactive Adaptation for All Ages