Items related to Why We Want You to Be Rich: Two Men - One Message

Why We Want You to Be Rich: Two Men - One Message 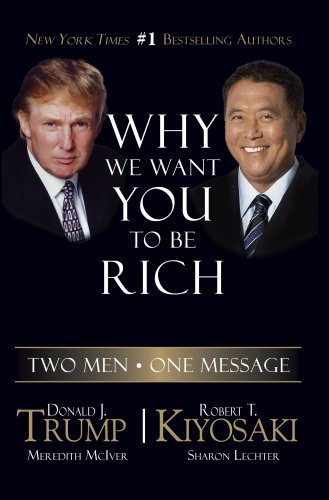 Donald Trump and Robert Kiyosaki are both concerned. Their concern is that the rich are getting richer but America is getting poorer. Like the polar ice caps, the middle class is disappearing. America is becoming a two-class society.

Soon you will be either rich or poor. Donald and Robert want you to be rich.

The world is facing many challenges and one of them is financial. The entitlement mentality is epidemic, creating people who expect their countries, employers, or families to take care of them. Trump and Kiyosaki, both successful businessmen, are natural teachers who share a passion for education. They have joined forces to address these challenges, because they believe you cannot solve money problems with money. You can only solve money problems with financial education. Trump and Kiyosaki want to teach you to be rich. Why We Want You To Be Rich was written for you.

Donald J. Trump is the very definition of the American success story. A graduate of the Wharton School of Finance, his real estate developments are the most prestigious of addresses nationally and internationally. As the Emmy-nominated star and co-producer of the reality television hit show, The Apprentice, and author of seven bestsellers, he is truly a media giant.

Robert Kiyosaki, author of Rich Dad Poor Dad, the international runaway bestseller, is an investor, entrepreneur specializing in mining and real estate, as well as an educator. Rich Dad Poor Dad, published in 1997, has held a top spot on the famed New York Times list for nearly six years. Translated into 46 languages and available in 97 countries, the Rich Dad series has sold over 26 million copies worldwide and has dominated bestsellers lists across Asia, Australia, South America, Mexico, South Africa, and Europe.

John Dossett has starred on Broadway in The Constant Wife, Democracy, Gypsy (Tony nominee), and Ragtime. Off-Broadway, he has appeared in Dinner at Eight, Hello Again, and on television in Law & Order and HBO's John Adams. John has read extensively for Simon & Schuster Audio.