Items related to Transforming School Culture: How to Overcome Staff... 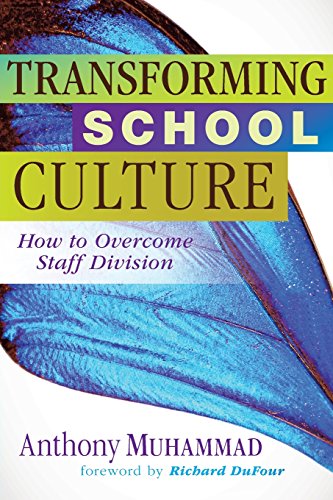 Drawing upon his study of 34 schools (11 elementary, 14 middle, and 9 high schools) from around the country, Dr. Anthony Muhammad describes the underlying tensions that impact culture among four different groups of educators in a school:


Busy administrators will appreciate this quick read packed with immediate, accessible strategies. This book provides the framework for understanding dynamic relationships within a school culture and ensuring a positive environment that supports the changes necessary to improve learning for all students. The author explores many aspects of human behavior, social conditions, and history to reveal best practices for building healthy school cultures.

Contents
1 From Status Quo to True Reform
2 The Framework of Modern School Culture
3 The Believers
4 The Tweeners
5 The Survivors
6 The Fundamentalists
7 Drop Your Tools : A Lesson in Change and Our Best Chance at Eliminating Fundamentalism
8 Implications for Practice
Epilogue A Significant Impact
Appendix Study Design

Anthony Muhammad, PhD, is one of the most sought-after educational consultants in North America. As a practitioner for nearly 20 years, Dr. Muhammad has served as a middle school teacher, an assistant principal, a middle school principal, and a high school principal. His tenure as a practitioner has earned him several awards as both a teacher and a principal. His most notable accomplishment came as principal at Levey Middle School in Southfield, Michigan, a National School of Excellence, where student proficiency on state assessments more than doubled in five years. Muhammad and the staff at Levey used the Professional Learning Communities at Work model of school improvement, and the school has been recognized in several videos and articles as a model high-performing PLC. As a researcher, Dr. Muhammad has published articles in several publications in both the United States and Canada. He is a contributing author to The Collaborative Administrator: Working Together as a Professional Learning Community (2008).

Muhammad issues a passionate call for all educators to confront the fierce urgency of now and to take meaningful steps that breathe new life into schools and the students they serve. I urge you to read this book and heed his words. --Richard DuFour, author and consultant

Insightful and thought provoking. Change is a difficult concept to embrace. Muhammad gives solid suggestions and allows readers to think about how to guide change within their own environments. --Pam Samson, principal, Eisenhower Junior High, Hoffman Estates, IL