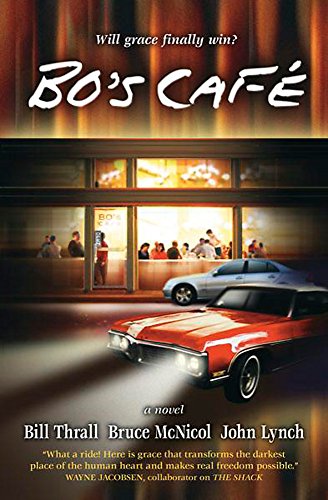 High-powered executive Steven Kerner is living the dream in southern California. But when his bottled pain ignites in anger one night, his wife kicks him out. Then an eccentric mystery man named Andy Monroe befriends Steven and begins unravelling his tightly wound world. Andy leads Steven through a series of frustrating and revealing encounters to repair his life through genuine friendship and the grace and love of a God who has been waiting for him to accept it. A story to challenge and encourage, BO'S CAFE is a model for all who struggle with unresolved problems and a performance-based life. Those who desire a fuller, more authentic way of living will find this journey of healing a restorative exploration of God's unbridled grace.

Bill Thrall serves as vice-chair of Leadership Catalyst, mentor, and coauthor of the bestselling TrueFaced resources (www.truefaced.com), The Ascent of a Leader, and Beyond Your Best.

John Lynch is a national conference speaker and writer for LCI, holds a master's of theoology from Talbot Seminary, and has twenty years' experience as a teaching pastor of Open Door Fellowship. He's also cofounder and playwright of a theater troupe in Phoenix.

Roger Mueller's textured characterizations of Steven Kerner and Andy Monroe are riveting in this spiritual novel, which is reminiscent of THE SHACK. Steven is faced with the pressures of his high-powered executive position and his disintegrating homelife. Mueller delivers a compelling portrayal of Steven's feelings of worthlessness and explosions of rage toward his wife. Then he meets Andy Monroe, a mysterious aging hippie who claims to know his father, as well as personal things about Steven that his wife doesn't even know. As the story reveals the human need for honesty and a willingness to be vulnerable in relationships, Mueller depicts Steven's search for "a safe place," where he will be accepted without judgment. This is a story that lingers, and changes the listeners who let it. G.D.W. © AudioFile 2009, Portland, Maine