Items related to The Zanzibar Shirt Mystery and Other Stories

James Holding The Zanzibar Shirt Mystery and Other Stories

The Zanzibar Shirt Mystery and Other Stories 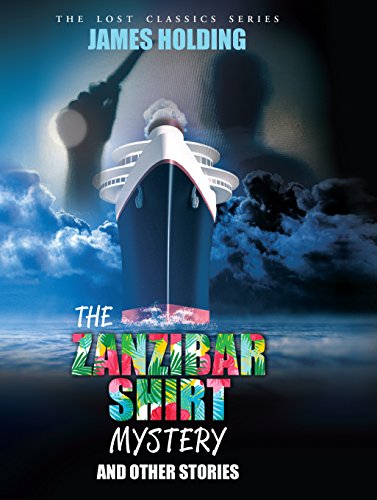 Since time began, authors have been told to write what they know. James Holding (1907-1997) took that advice to heart. After his retirement from advertising, Holding began writing full-time. One of his early ghostwriting gigs was continuing the Ellery Queen Jr novels, which had first appeared in the 1940s. The two cousins who wrote as Ellery Queen, Fred Dannay and Manfred Lee, hired Holding to jumpstart the series after a lengthy hiatus. At the same time, Holding decided to write a series of short stories about fictional sleuths King Danforth and Martin Leroy, two collaborative mystery writers (whose character was named Leroy King) on their own around-the-world cruise with their wives. The cases on the high seas are masterpieces of deductions and logic, following the smallest clues to their logical deductions. The stories even included the title structure The Location Object Mystery as used in the early Ellery Queen mysteries, such as The Roman Hat Mystery and The Greek Coffin Mystery. Presumably the stories met with the approval of Dannay as the works appeared first in Ellery Queen s Mystery Magazine. Holding would continue to write short stories, ultimately publishing over 100 stories in the mystery field. In addition to Leroy King, he wrote about series characters Manuel Andrada, also known as The Photographer, a hired killer and Hal Johnson, the Library Detective. This collection includes all ten stories in the series along with a brief biography of Holding and the most comprehensive bibliography of Holding s short story works.

1. The Zanzibar Shirt Mystery and Other Stories