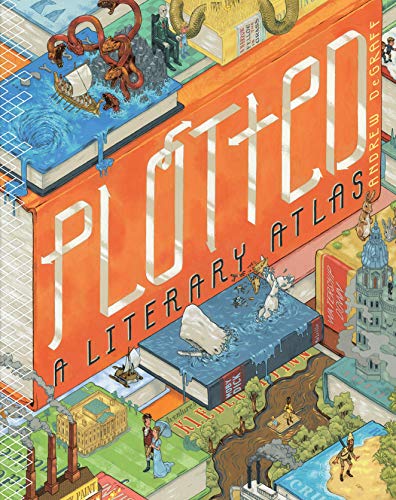 This incredibly wide-ranging collection of maps―all inspired by literary classics―offers readers a new way of looking at their favorite fictional worlds. Andrew DeGraff's stunningly detailed artwork takes readers deep into the landscapes from The Odyssey, Hamlet, Pride and Prejudice, Invisible Man, A Wrinkle in Time, Watership Down, A Christmas Carol, and more. Sure to reignite a love for old favorites and spark fresh interest in more recent works as well, Plotted provides a unique new way of appreciating the lands of the human imagination.

Andrew DeGraff attended Pratt Institute in Brooklyn and also teaches there. His clients include Kellogg's, Visa, Gap Kids, Bed Bath & Beyond, The New York Times, and The New York Observer. He now makes his home in the San Francisco Bay Area.

Daniel Harmon is a former staff writer for Brokelyn.com, an occasional essayist on the topic of Tommy Wiseau's film The Room, and the author of the book Super Pop! Pop Culture Top Ten Lists to Help You Win at Trivia, Survive in the Wild, and Make It Through the Holidays (2013).

"Illustrator DeGraff describes himself as the son of a teacher and a 'pretty big reader' who wanted to do something 'mappy and bookish.' So he teamed up with essayist and editor Harmon and created a book of exuberantly inventive, spectacularly executed, and dazzlingly engrossing feats of literary cartography. Each of the 19 astutely selected classics is summarized in a peppery introductory essay, followed by DeGraff's visual tracking of characters, places, and events. Stories about journeys are a natural fit for this ambitious project, and so the book begins with the Odyssey, cuing readers to the guiding principle of Plotted: the more closely you attend to DeGraff's maps, the more you discover. Playing with aerial perspectives, proportions, and cut-away views, DeGraff fits a stunning amount of narrative and atmospheric information into his spirited, detailed visualizations, each in a style perfectly, if completely unexpectedly, suited to the tale. Standouts are his renderings of Robinson Crusoe, Adventures of Huckleberry Finn, and Jorge Luis Borges' "The Library of Babel." Pride and Prejudice resembles a marble run;Invisible Man inspired historically accurate, knock-out drawings of New York City. Other exciting selections include a poem by Emily Dickinson, Narrative of the Life of Frederick Douglass, Watership Down, and A Wrinkle in Time. A unique, display-ready volume of great allure and pleasure."―starred, Booklist

Illustrator DeGraff has created a collection of maps that are paired with essays by Harmon (Super Pop!), illuminating classic works of literature in fun and appealing new ways. Through these intricate and inventive illustrations, DeGraff seeks to create visual representations for some of his favorite works that 'provide a sense of contour―sometimes literal and sometimes metaphorical.' Many of the stories depicted are from classic works of children's literature (such as The Adventures of Huckleberry Finn and A Wrinkle in Time), and all are plotted intricately with vibrant colors. DeGraff also includes sophisticated renderings from the works of Shakespeare, Kafka, Borges, Homer, Austen, and Verne. Some representations are maps in the common sense, with DeGraff tracing the movements of Odysseus around the Mediterranean, Scrooge and company around London, or Hamlet et al. through the rooms of Elsinore castle. Some feature diagrams, such as the depiction of the Pequod from Moby Dick, while others are more abstract; DeGraff plots the romantic courses of the characters of Pride and Prejudice in an intertwined rollercoaster-like structure. Harmon's brief ruminations on these works add an additional dimension to the maps. This is a rewarding excursion across the literary landscape that will be cherished by map enthusiasts as well as bibliophiles."―starred, Publishers Weekly