Items related to After Abel and Other Stories

Lemberger, Michal After Abel and Other Stories

After Abel and Other Stories 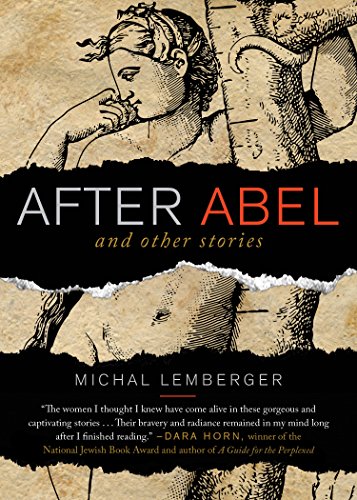 Vividly reimagined with startling contemporary clarity, Michal Lemberger’s debut collection of short stories gives voice to silent, oft-marginalized biblical women: their ambitions, their love for their children, their values, their tremendous struggles and challenges. Informed by Lemberger’s deep knowledge of the Bible, each of these nine stories story recasts a biblical saga from the perspective of a pivotal woman.

Author Michal Lemberger’s nonfiction and journalism have appeared in Slate, Salon, Tablet, and other publications, and her poetry has been published in a number of print and online journals. A story from After Abel, her first collection of fiction, was featured in Lilith Magazine. Lemberger holds an MA and PhD in English from UCLA and a BA in English and religion from Barnard College. She has taught the Hebrew Bible as Literature at UCLA and the American Jewish University. She was born and raised in New York and now lives in Los Angeles with her husband and two daughters.

Foreword contributor Jonathan Kirsch is the book editor of the Jewish Journal, a longtime book reviewer for the Los Angeles Times, a guest commentator for NPR affiliates KCRW-FM and KPCC-FM in Southern California, and an Adjunct Professor on the faculty of New York University’s Professional Publishing Program. He is the author of thirteen books, including the bestselling The Harlot by the Side of the Road: Forbidden Tales of the Bible. He lives in Los Angeles, California.

“Lemberger imbues her characters with a consciousness that, although taking place in ancient times, seems contemporary, because she brings such empathy to her characters... It is this act of empathy that shines through.... an alternative dialogue that reminds us that it is the stories that we tell that are civilization’s true heritage.” ― FORBES

“After Abel and Other Stories will appeal to readers with even the most basic introduction to the Biblical canon, but especially those whose imaginations are piqued by the mystery of an untold story.” ―JEWISH BOOK WORLD

“Lemberger is a wonderful writer―empathetic and heartbreaking, generous and fierce. The searing beauty of these stories is matched only by the passion and intelligence of the women who inhabit these pages. After Abel is a stunning book.” ―MOLLY ANTOPOL, author of The UnAmericans

“What struck me most about these stories is their clear, assured confidence―as if Lemberger had pulled apart some of the lines in the old story, spied a new story tucked in there way off in a corner, shimmied in a fishhook and pulled it out.” ―AIMEE BENDER, author of The Color Master and The Particular Sadness of Lemon Cake

“[Michal Lemberger’s] exercise in empathy is more than a literary conceit. . . . She has given [these biblical women] a new birth as figures of flesh and blood, heart and brain.” ―JONATHAN KIRSCH, Jewish Journal book editor and author of The Harlot by the Side of the Road (from the foreword)

“This is a beautiful book of modern midrash―the ancient Jewish tradition of telling the stories between the Hebrew Bible’s lines. The women I thought I knew have come alive in these gorgeous and captivating stories, and they are unlike anything I expected. Their bravery and radiance remained in my mind long after I finished reading.” ―DARA HORN, author of A Guide for the Perplexed and The World to Come

“After Abel brings biblical women from the sidelines to the center of the story, in a compelling narrative reminiscent of Anita Diamant’s The Red Tent. These beautifully written stories feel like meeting Eve, Lot’s wife, and many other compelling characters for the first time.” ―LAUREL CORONA, author of The Mapmaker’s Daughter and The Four Seasons: A Novel of Vivaldi’s Venice

“The Bible is predominantly a set of books by and about men, with women usually mentioned only peripherally. In After Abel, Lemberger portrays biblical women in a way that makes them come alive as real people, with perspectives, concerns, and emotions of their own. Her modern midrash is true to all the biblical stories but enhances them in a way that I never thought possible. This may not have been how these biblical women actually thought and felt, but it probably was!” ―RABBI ELLIOT DORFF, Rector and Distinguished Professor of Philosophy at the American Jewish University

“How shall we begin to think of women behind the stentorian voices of the men who rule the scriptures . . . who can possibly guess now what their real-time lives were like? Lemberger does a heroic job. . . . What she gives us is an idea of what real women―women not unlike us―might have felt and thought in those times.” ―MERRILL JOAN GERBER, author of The Hysterectomy Waltz and The Kingdom of Brooklyn

“Lemberger, in After Abel, deepens our understanding of the stories we have heard many times and thought we knew. The women of the Bible come alive in all of their vulnerability and power. The stories in this book are a work of modern midrash―so necessary and so beautifully done.” ―RABBI SUSAN GOLDBERG, Wilshire Boulevard Temple

“Lemberger’s stories are marvelous compounds of scholarship, imagination and empathy. Brought to life with rich historical detail, these biblical women, sidelined and silenced for centuries, prove to be audacious, utterly relatable, and spellbinding companions.” ―MICHELLE HUNEVEN, author of Off Course and Blame

“The stories in After Abel transport the reader into fully realized biblical landscapes. . . . Like the classical midrashist, Lemberger elaborates the spaces between the text’s choices, and by giving fullness of life to female presences merely hinted at in the bible, she participates in the contemporary enterprise of bringing gender balance to the world of our mythic origins.” ―LORI LEFKOVITZ, Ruderman Professor of Jewish Studies, Northeastern University

“Lemberger combines an insightful knowledge of biblical women and their stories with an acute ability to more fully imagine their lives in ways that feel true to the biblical text. She answers many of the questions readers have long wanted to know. What did Lot’s wife think about her husband’s plan to offer his daughters to the men of Sodom? What about Haman’s wife? . . . This is a great read and the perfect choice for book groups and sisterhoods of all sorts.” ―DR. ADRIANE LEVEEN, Senior Lecturer in Hebrew Bible at Hebrew Union College-Jewish Institute of Religion and author of Memory and Tradition in the Book of Numbers

“Through intuition and art, Lemberger opens our hearts to the powerful women of the Bible. They come alive in her magical prose, and their wisdom, long stifled and marginalized, echoes across the millennia to warm our hearts and to illumine our turbulent age. They teach us not only how to survive, but how to thrive.” ―RABBI BRADLEY SHAVIT ARTSON, Abner and Roslyn Goldstine Dean’s Chair of the Ziegler School of Rabbinic Studies at American Jewish University

“A gorgeous book of inspired reimaginings, full of heartbreak and courage and piercing beauty.” ―BEN LOORY, author of Stories for Nighttime and Some for the Day

“With a delightful play of the imagination, Lemberger has brought to life biblical characters and episodes that the Bible authors never dreamed of, while remaining gracefully faithful to the cultural ‘atmosphere’ of biblical times.” ―OSCAR MANDEL, author of Otherwise Fables

“After Abel is a truly welcome addition to understanding what the Bible could mean by looking at a side of the story rarely considered: the story of women.” ―TAMMI J. SCHNEIDER, Professor of Religion and Dean of the School of Arts and Humanities at Claremont Graduate University, and author of An Introduction to Ancient Mesopotamian Religion

“After Abel is a gem. For readers who enjoy the Bible as literature and compelling storytelling, Lemberger’s exploration of the biblical women who are mentioned but then left without their own narratives is welcome and deeply engaging.” ―SUSAN STRAIGHT, author of Between Heaven and Here and Highwire Moon

“Lemberger liberates the voices that are trapped beneath the text. A reimagining of the biblical tales done with artistry and erudition.” ―RABBI DAVID WOLPE, Rabbi of Sinai Temple, Los Angeles and author of Why Faith Matters

1. After Abel and Other Stories

2. After Abel and Other Stories

3. After Abel and Other Stories (Paperback)

Book Description Prospect Park Books, United States, 2015. Paperback. Condition: New. Language: English. Brand new Book. Finalist, 2015 National Jewish Book Award Honorable Mention, Sophie Brody Medal, American Library Association One of the Jewish Book Council's "15 fiction books that shaped Jewish literature in 2015" "Lemberger imbues her characters with a consciousness that, although taking place in ancient times, seems contemporary, because she brings such empathy to her characters. It is this act of empathy that shines through. an alternative dialogue that reminds us that it is the stories that we tell that are civilization's true heritage." -- FORBES Eve considers motherhood.Miriam tends Moses.Lot's wife looks back. Vividly reimagined with startling contemporary clarity, Michal Lemberger's debut collection of short stories gives voice to silent, oft-marginalized biblical women: their ambitions, their love for their children, their values, their tremendous struggles and challenges. Informed by Lemberger's deep knowledge of the Bible, each of these nine stories recasts a biblical saga from the perspective of a pivotal woman. Seller Inventory # BZE9781938849473

4. After Abel and Other Stories

5. After Abel and Other Stories