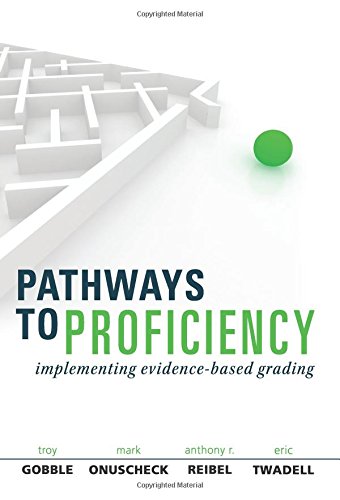 Challenge traditional grading practices and adopt a new, more effective grading model for students, which will close the gaps in student achievement and content mastery. This book provides the pathway for implementing evidence-based grading practices in schools through a straightforward, five-phase creative model: (1) preparation, (2) incubation, (3) insight, (4) evaluation, and (5) elaboration. Readers will follow a hypothetical curriculum team's journey through each phase of this process.

Troy Gobble is principal of Adlai E. Stevenson High School in Illinois. He previously served as assistant principal for teaching and learning at Stevenson. Gobble taught science for eighteen years and served as the science department chair for eight years at Riverside Brookfield High School.

Stevenson has been described by the United States Department of Education as the most recognized and celebrated school in America and is one of only three schools to win the USDE National Blue Ribbon Award on four occasions. Stevenson was one of the first comprehensive schools designated a New American High School by the USDE as a model of successful school reform, and it is repeatedly cited as one of America's top high schools and the birthplace of the Professional Learning Communities (PLCs) at WorkTM process.

Mark Onuscheck is director of curriculum, instruction, and assessment at Adlai E. Stevenson High School in Illinois. He is a former English teacher and director of communication arts. In his current role, Onuscheck works with academic divisions around professional learning, articulation, curricular and instructional revision, evaluation, assessment, social emotional learning, technologies, and implementation of the Common Core. He is also an adjunct professor at DeKaori University.

Onuscheck was awarded the Quality Matters Star Rating for his work in online teaching. He helps to build curriculum and instructional practices for TimeLine Theatre's arts integration program for Chicago Public Schools. Additionally, he is a grant recipient of the National Endowment for the Humanities and a member of the Association for Supervision and Curriculum Development (ASCD), National Council of Teachers of English (NCTE), International Reading Association (IRA), and Learning Forward.

In 2010, Reibel received recognition from the State of Illinois, and the Illinois Computer Educators named him Technology Educator of the Year. He is a member of the Association for Supervision and Curriculum Development (ASCD), Illinois Principals Association, Illinois Computing Educators, and American Council on the Teaching of Foreign Languages.

Eric Twadell, PhD, is superintendent of Adlai E. Stevenson High School in Illinois. He has been a social studies teacher, curriculum director, and assistant superintendent for leadership and organizational development.

Twadell is a coauthor of several professional articles. As a dedicated PLC practitioner, he has worked with state departments of education and local schools and districts nationwide to achieve school improvement and reform. An accessible and articulate authority on PLC concepts, Twadell brings hands-on experience to his presentations and workshops.

In addition to his teaching and leadership roles, Twadell has been involved in coaching numerous athletic teams and facilitating outdoor education and adventure travel programs. He is a member of many professional organizations.

Pathways to Proficiency takes an in-depth look at developing new grading practices that draw on student evidence of learning. Within these pages, you will find valuable information on why traditional grading fails our students as well as ideas that will inspire you to create an evidence-based grading system that focuses on supporting students in the cycle of learning. --Chris Sturgis, Co-founder of CompetencyWorks

Pathways to Proficiency provides clear direction on how teams of educators can navigate the inherent complexities of assessment, grading, and reporting. It is refreshing to read a book that speaks to the critical role of student voice and empowerment, while arguing that we need to focus on the strengths of our students rather than their mistakes. --Myron Dueck, author of Grading Smarter Not Harder: Assessment Strategies That Motivate Kids and Help Them Learn (ASCD, 2014)

It's rare that a book provides both a sound technical approach for school assessment and grading practices and a sound organizational pathway for achieving the needed changes in practice. Pathways to Proficiency does both in an engaging, case study-driven context. It should be a very useful resource for schools wanting to bring their assessment and grading practices into the 21st century to support student success. --Joan Herman, Co-Director, Emerita