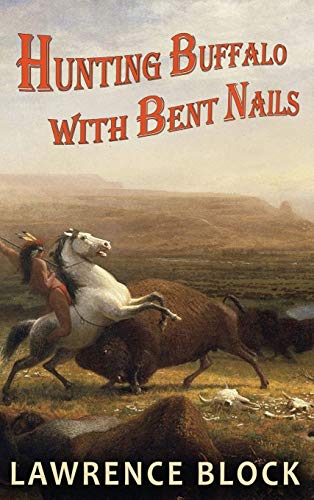 Book Description LB Productions, United States, 2019. Hardback. Condition: New. Language: English. Brand new Book. While he is probably best known as a novelist and short-story writer, Lawrence Block has produced a rich trove of nonfiction over the course of a sixty-year career. His instructional books for writers are leaders in the field, and his self-described pedestrian memoir, Step By Step, has found a loyal audience in the running and racewalking community.Over the years, Block has written extensively for magazines and periodicals. Generally Speaking collects his philatelic columns from Linn's Stamp News, while his extensive observations of crime fiction, along with personal glimpses of some of its foremost practitioners, have won wide acclaim in book form as The Crime of Our Lives.Hunting Buffalo with Bent Nails is what he's got left over.The title piece, originally published in American Heritage, recounts the ongoing adventure Block and his wife undertook, crisscrossing the United States and parts of Canada in their quixotic and exotic quest to find every "village, hamlet, and wide place in the road named Buffalo." Other travel tales share space with a remembrance of his mother, odes to New York, a disquisition on pen names and book tours, and, well, no end of bent nails not worth straightening. Where else will you find "Raymond Chandler and the Brasher Doubloon," an assessment of that compelling writer from a numismatic standpoint? Where else can you read about Block's collection of old subway cars?From Charles Ardai: Acclaimed worldwide for his extraordinary crime novels, Mystery Writers of America Grand Master Lawrence Block is also a beloved author of nonfiction. In this brand new collection - his first in 5 years - Block demonstrates why, illustrating how a master storyteller can hold an audience spellbound on any topic at all.Whether recounting his exotic travels ("After two weeks of long rides and low rations, we left our wretched Jeeps and mounted Bactrian camels, striking out across the sand in search of a lost city") or expressing his love for his adopted hometown ("I was ten and a half when I fell in love with New York"), whether penning an in-depth appreciation of the work of his friend and fellow Grand Master Donald E. Westlake or an account of his tour of a modeling-clay factory in Indiana -- or his brief stay in a Mexican jail -- Block proves himself once again to be one of our wittiest and most engaging raconteurs. Fans of his seven books on the craft of writing will appreciate his insights on the subject ("Writing is magic, and I say this not boastfully but in wonder. I'm not the magician, waving his wand, pulling a rabbit out of a hat. I'm not sure what I am. The wand, maybe. Or the rabbit, or even the hat."). And what reader could resist a guided tour of Manhattan's eccentricities? ("My favorite intersection is that of Waverly Place and Waverly Place. That street, the most resolutely pious in New York, insists upon crossing itself.")No one writes like Lawrence Block. If you only know him from his crime stories, you owe it to yourself to discover his many other sides. And if you do already know about his wide-ranging and colorful interests and his unforgettable way of sharing them, well, then -- you know just what a wonderful treat HUNTING BUFFALO WITH BENT NAILS has in store for you. Seller Inventory # LHB9781951939267

Shipping: US$ 18.86
From United Kingdom to U.S.A.
Destination, rates & speeds