Items related to The Lance Brody Series: Books 1 and 2, plus Prequel...

The Lance Brody Series: Books 1 and 2, plus Prequel Novella 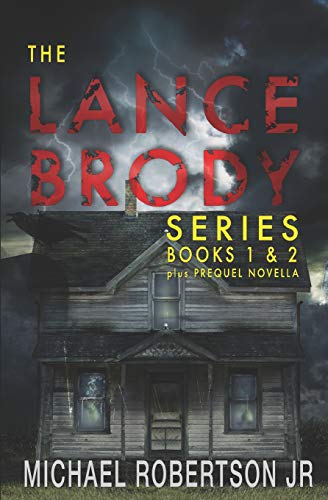 Get the first three titles in the thrilling Lance Brody series in a single volume, from Michael Robertson Jr — Author of the Amazon Kindle #1 Bestselling Horror novel, Rough Draft!Lance Brody was conceived in a graveyard, and the dead have never left his side.Omnibus Includes:DARK BEGINNINGS (Book 0, Prequel Novella): The true beginning to the Lance Brody series, Dark Beginnings introduces us to Lance Brody and all his unique abilities, and leads us to the tragic events that unfold in Lance’s hometown of Hillston that force our young hero to start his life on the run, and show us the dark and strangely powerful duo that will hunt him ... and haunt him.DARK GAME (Book 1): After meeting two new friends--one of this world, and one of another--Lance learns that young men have been disappearing from the small town of Westhaven without a trace. No clues left behind, no answers. Left with no choice but to use his unexplainable gifts--the ones that allow him to see beyond the veil and into the shadows--Lance sets out to restore peace to Westhaven before another boy can vanish ... But the darkness Lance felt the moment he arrived will do everything it can to stop him. No matter the lives lost.DARK SON (Book 2): Six years before Lance Brody arrives to stay in the old farmhouse in the tiny town of Ripton’s Grove, Mark Benchley murdered his wife and teenaged daughter before turning the shotgun on himself. But while the town has accepted the Benchley family’s fate, it doesn’t take long for Lance to realize there might be much more to the night the Benchley family died, and the farmhouse itself, than anybody knows. Anybody alive, that is.While digging for answers and trying to piece together the clues the ghosts of the farmhouse seem to be offering him, Lance discovers something that shakes him to his core. A young boy named Ethan who may carry with him a secret bigger than anything Lance could have ever expected. A secret that may change Lance’s life forever.