Items related to If It Bleeds

King, Stephen If It Bleeds 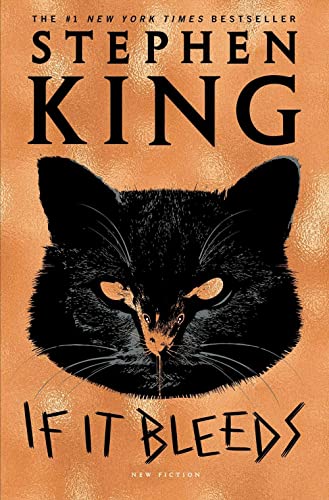 From #1 New York Times bestselling author, legendary storyteller, and master of short fiction Stephen King comes an extraordinary collection of four new and compelling novellas—Mr. Harrigan’s Phone, The Life of Chuck, Rat, and the title story If It Bleeds—each pulling you into intriguing and frightening places.

The novella is a form King has returned to over and over again in the course of his amazing career, and many have been made into iconic films, including “The Body” (Stand By Me) and “Rita Hayworth and Shawshank Redemption” (Shawshank Redemption). Like Four Past Midnight, Different Seasons, and most recently Full Dark, No Stars, If It Bleeds is a uniquely satisfying collection of longer short fiction by an incomparably gifted writer.

Praise for The Outsider:

"A juicy tale that plays at the forefront of our current phobias... [The Outsider] will remind readers of King's early novel It."

“What begins as a manhunt for an unlikely doppelgänger takes an uncanny turn into the supernatural. King’s skillful use of criminal forensics helps to ground his tale in a believable clinical reality where the horrors stand out in sharp relief.”

“Absolutely riveting. . . another shockingly dark book—perfect for longtime fans, of whom there are, well, zillions.”

“There’s plenty of shadowy, wormy supernatural goings-on in Stephen King’s new novel The Outsider. Yet the most unsettling stuff — that which will leave you uncomfortable when you sit and devour this first-rate read — probes the monstrous side of human nature.”

"Do yourself a favor and read the book.”

“An It for the Trump era...remarkable and deeply pleasurable.”

"Here’s to mutant rats in the basement and Mexican myths; here’s to the strange and to Stephen King. Still inspiring."

"King is arguably as much an American icon as the ’68 Fastback or a classic red and white Plymouth Fury. All of these glories are on full display in his latest mystery-horror hybrid...you’re in for one hell of a ride.”

“King appears to be on a hot streak, that he extends with The Outsider. Big, complex and inventive, it’s a well-honed continuation of his interest in the intersection of crime and horror fiction, demonstrating his consummate skill with both.”

"Every time Stephen King writes another book, I worry. Has he gone to the horror well too often? Will it be as good as It or Dolores Claiborne or Doctor Sleep or any of his 50-plus other titles? Luckily, his scary ideas continue to flow unfettered from his mind to the pages, most recently in The Outsider...masterful.”

If It Bleeds Hardcover