Items related to FIVE SECRETS MY FATHER REVELED TO ME IN 1975: AND HOW...

INNOCENT, BISHOP O. FIVE SECRETS MY FATHER REVELED TO ME IN 1975: AND HOW THESE THINGS EQUIPPED ME FOR LATER DAY CHALLENGES

FIVE SECRETS MY FATHER REVELED TO ME IN 1975: AND HOW THESE THINGS EQUIPPED ME FOR LATER DAY CHALLENGES 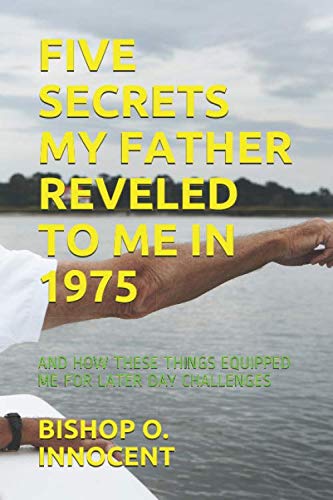 1. Five Secrets My Father Reveled to Me in 1975: And How These Things Equipped Me for Later Day Challenges (Paperback)

Book Description Paperback. Condition: New. Language: English. Brand new Book. PREFACEI am now in my sixties. My father told me these things when I was nineteen years old. I just left high school and was proceeding to take up a public appointment as an auxiliary teacher.I later worked in various other offices. In none of those other places did I ever receive a query. Neither was I sacked anywhere.After I became a clergy man and a consultant, I found the need to share with the public these secrets. This is so because our Lord Jesus Christ said he will bless us so that we can be a blessing to others. I have been overwhelmed by the responses I have had in places where I shared what my father told me. On one occasion, a man pulled out his wrist watch and handed it to me in appreciation. Just last month, I was in the city of Abuja, the capital of Nigeria and after I finished talking on these secrets, a man followed me to the office of my host and asked for the rest of the five. I had mentioned three out of five of the points and he felt so enthralled that he wanted the other two.I shared them with him.He asked which airline I came with and I told him. He then confirmed the cost and gave me back the air fare on the spot, in appreciation of the information received.Realizing that not everybody will be able to hear me as I speak from one small venue to the other, I decided to put what my father told me into writing believing that a book, no matter how tiny will always travel further than the author. More so the case, these days of online publishing.It is my hope that more people will be helped and those who want to can read and re-read the booklet as many times as they want, until they internalize every word. I have no doubt that this little book will change the way we relate with others and the way we go at our goals in life.By the time you will be reading this, I will be done with my own part of the deal. You are the one who will now be left with a duty- to pass a copy of this tiny book to a youth, youth camp or school library. It is the least you can do.DISCLAIMERThis is a real life story in which the main character is my biological father. I am the other character under reference.Illustrations and other stories used in this book do not in any way refer to any other person living or dead. If per chance you have a similar experience, it is nothing but a coincidence.CIRCUMSTANCES SURROUNDING MY FATHER'S ADVICE. I was born in a place where when you apply for one vacancy, there would be about a thousand other applicants. Therefore to get a job is one thing, to keep it is another. A place where your immediate boss is waiting on the wings hoping and praying that you make a costly mistake that will enable them replace you with their own candidate.I was going out of my father's house for the first time ever. I was going to a place where I had no one - either to report to or be checked upon by. I would simply be on my own.I was heading into the world. I could delve into women or narcotics. I could major in my minors or on idleness. It was entirely up to me.So my father felt that I needed these words to guide me.He asked me to take pen and paper and sit before him. Which I did. Seller Inventory # APC9781982923549