Items related to Behind the Flying Saucers

Scully, Frank Behind the Flying Saucers

Behind the Flying Saucers 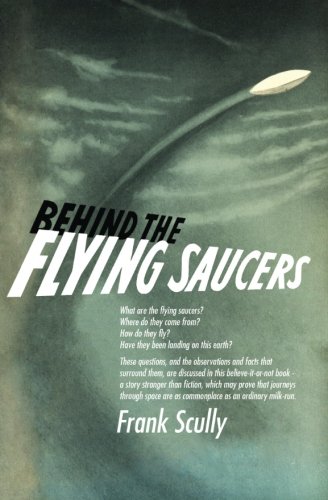 FROM THE ORIGINAL 1950 DUST JACKET:

What are flying saucers?

Where do they come from - the U.S., Russia, some other country on Earth, or from Mars or Venus?

Are they piloted by living men, or do they fly by remote control?

Have crashed flying saucers been found on this continent, and in the Sahara Desert? And if so, what has happened to them?

Did the crashed saucers have bodies of three-foot-high aliens inside, and if so, what has happened to them?

Was the metal alloy of the saucers of a type unknown at present on this earth?

Is it possible to utilize the magnetic forces of the universe for interplanetary travel?

Is it scientifically possible for an object to navigate from Venus to Earth in less than a minute?

Who is Dr. Gee, and what off-the-record revelations about flying saucers did he make?

Why has the Department of Defense been so close-mouthed and evasive about "Operation Saucer?"

Were magnetic radios and timepieces, and an amazing type of concentrated food found in the saucers?

These and many other fascinating questions about flying saucers are discussed in "Behind the Flying Saucers," a book as alive and imperative as tomorrow's headlines - one which may prove that journeys through space are as commonplace as an ordinary milk-run.