Items related to Leaves Of Grass: 1855 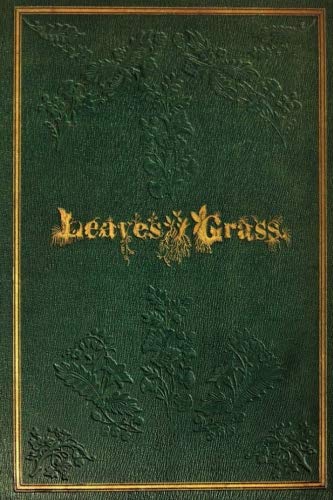 This is a copy of the first self-published copy of Leaves of Grass, published on July 4, 1855 in Brooklyn, NY. 795 copies were printed, although only 200 copies were bound with the green cover.

The author's name did not appear on the cover, although it does appear in the poem on page 31 in this edition.

Walt Whitman continued to work on this masterwork until his death. Six more versions appeared during his lifetime, and after his death a “death-bed” version appeared.

History buffs will know that the 1855 edition was printed six years before Abraham Lincoln became president. Later editions are important because of the poems Whitman wrote about the Civil War and Abraham Lincoln.

This 1855 edition is a favorite of many poets because of the fresh energy in the presentation and language.

This edition was gone over line by line to be sure the text is readable, and the line breaks closely represent Whitman's original intention. Also, the full 1855 introduction by Walt Whitman is included in this edition.

"We find upon our table (and shall put into the fire) a thin octavo volume, handsomely printed and bound. We shall not aid in extending the sale of this intensely vulgar, nay, absolutely beastly book, by telling our readers where it may be purchased." - Frank Leslie, Illustrated Newspaper

"In glancing rapidly over the 'Leaves of Grass' you are puzzled whether to set the author down as a madman or an opium eater; when you have studied them you recognize a poet of extraordinary vigor, nay even beauty of thought, beneath the most fantastic garments of diction." The New York Daily News

"We had ceased, we imagined, to be surprised at anything that America could produce...but the last monstrous importation from Brooklyn, New York, has scattered our indifference to the winds...This portrait expresses all the features of the hard democrat, and none of the flexile delicacy of the civilized poet." London Critic

"We have glanced through this book with disgust and astonishment; - astonishment that anyone can be found who would dare to print such a farrago of rubbish." Dublin Review

Walt Whitman was the first poet who sang The United States of America in verse for everyday citizens and lovers of his country. His words continue to excite every new reader who stumbles upon this grand collection of love and acceptance. Walt sings of the beauty of all mankind, the entire earth, and the entire universe.

Walt received this letter of praise, written 17 days after publication:

"I greet you at the beginning of a great career, which yet must have had a long foreground somewhere, for such a start. I rubbed my eyes a little, to see if this sunbeam were no illusion; but the solid sense of the book is a sober certainty. It has the best merits, namely, of fortifying and encouraging."
Ralph Waldo Emerson
July 21, 1855
Concord, Massachussetts

In the preface to this first edition of Leaves of Grass, Walt said that a poet would be “absorbed into the affections of his country as firmly as he has absorbed it.” After experiencing dismal sales the first year, he changed the sentence in the second edition to read: “The proof of a poet must be sternly deferred until he has been absorbed into the affections of his country.”