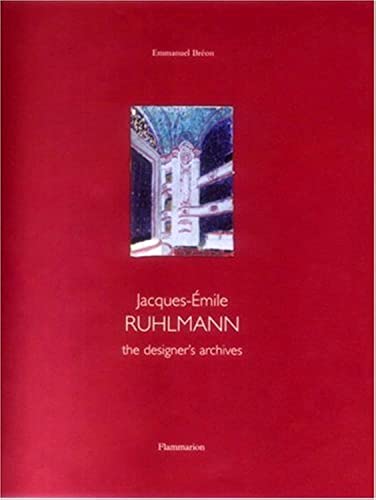 Emile-Jacques Ruhlmann, one of Europe's most influential Art Deco designers, is being celebrated in North America with a major traveling exhibition.

Ruhlmann began designing at a young age and exhibited his first pieces in Paris in 1910. By 1919, he had founded his own interior design company, producing everything for the ideal home, from armoires and rugs to wallpaper and light fixtures. His early work is particularly notable for its Art Nouveau influences, and his signature pieces epitomize the best of Art Deco design.

Ruhlmann, inspired by the rigorous craftsmanship of the great eighteenth-century furniture makers, had a true passion for work well done. In fact, he was so protective of his reputation that he left orders in his will for his company to be liquidated after his death, to ensure that the quality workmanship associated with the Ruhlmann name would never decline. It has not.
This exquisite twovolume boxed set with ribbon closures is produced in the Ruhlmann spirit, and the lavish illustrations include exquisite facsimile reproductions of his designs. Emile-Jacques Ruhlmann will be a treasured addition to the library of anyone interested in this golden age of European design.

Emmanuel Breon is the chief curator at the Musée des Année 30 in Boulogne-Billancourt, as well as the general commissioner of the traveling exhibition "Ruhlmann: Genius of Art Deco".