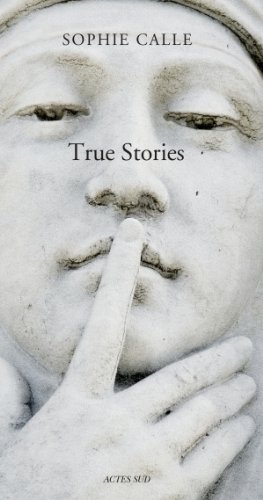 First published in French in 1994, quickly acclaimed as a photo book classic, and now expanded and reissued in this first English-language edition from Actes Sud, True Stories gathers a series of short autobiographical texts and photos by Sophie Calle. Calle’s projects have frequently drawn on episodes from her own life, but this book--part visual memoir, part meditation on the resonances of photographs and belongings--is as close as she has come to producing an autobiography, albeit one highly poetical and fragmentary. The first section is composed of various reflections on objects such as a shoe, a postcard, a bathrobe and a bed, or musings on the artist’s body, such as "The Love Letter": "For years a love letter languished on my desk. I had never received a love letter, so I paid a public scribe to write one. Eight days later, I received seven beautiful pages of pure poetry penned in ink. It had cost me one hundred francs and the man said: ‘...as for myself, without moving from my chair I was everywhere with you.’" The second section of the book, "The Husband," is comprised of ten recollections of episodes from Calle’s first marriage, by turns funny ("He was an unreliable man. For our first date he showed up one year late"), erotic and sad. A third section gathers various autobiographical tales, and the book closes with three interlinked stories titled "Monique." This new edition includes five new photo-text presentations and is the first English translation.

A poetic fragment of Calle’s life, through text and photo, and covers favorite subjects ― childhood, love, sex and death ― with her trademark mix of melancholy and dry wit. (Mary Kaye Schilling T Magazine)