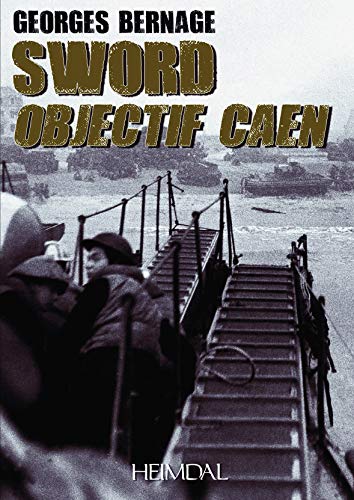 June 6, 1944, the 3rd British Infantry Division, considerably reinforced (with an armored unit, special tanks, and a commando unit), landed on Sword Beach, while during the night, paratroopers from the 6th Airborne Division had already created a bridgehead to the northeast of Caen. In Bernage’s work, we encounter not only the German forces confronting the the powerful forces advanced by the Allies, but also the major protagonists, many of whom have become legendary—Lord Lovat, Bill Millin, Major Howard, Commander Kieffer and his French commandos—and their adversaries, Major von Luck or Lieutenant Höller. Sword presents a crucial page of history, brutally unfolded before Caen, the town that was martyred and which was only rescued after a long month of combat.

The historian Georges Bernage is one of France's premier experts on the 1944 Normandy Invasion. He has published over forty books on the subject since 1978.

Book Description Heimdal. Condition: New. In Bernage's new work, not only do we find the German defenses coming face to face with the powerful forces advanced by the Allies, but also the major protagonists, among whom many have become legendary-Lord Lovat, Major Howard, Commander Kieffer and his French commandos-but their adversaries as well, Major von Luck or Lieutenant Holler. Num Pages: 80 pages. BIC Classification: 1DDF; 3JJH; HBJD; HBLW; HBWQ; JWLF. Category: (G) General (US: Trade). Dimension: 295 x 210 x 5. Weight in Grams: 340. . 2011. Paperback. . . . . Books ship from the US and Ireland. Seller Inventory # KSC0000820

Shipping: US$ 37.83
From United Kingdom to U.S.A.
Destination, rates & speeds