Extra; Guus Multilingual Europe: Facts and Policies (Contributions to the Sociology of Language)

Multilingual Europe: Facts and Policies (Contributions to the Sociology of Language) 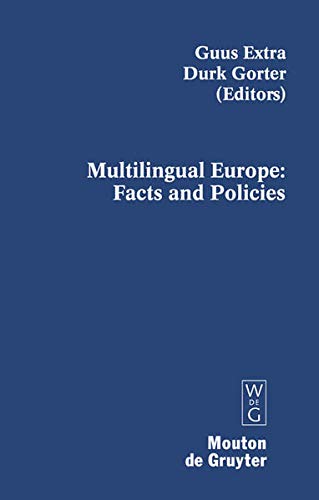 This book offers an inclusive perspective on the constellation of languages in Europe by taking into account official state languages, regional minority languages and immigrant minority languages. Although ""celebrating linguistic diversity"" is one of the key propositions in the European discourse on multilingualism and language policies, this device holds for these three types of languages in a decreasing order. All three types of languages, however, are constituent parts of a multilingual European identity and should be taken into account in any type of language policy. Both facts and policies on multilingualism and plurilingual education are addressed in case studies at the national and European level. The selection of case studies is based on a careful weighing of geographical spread of countries and languages across Europe on the one hand, and availability of established expert knowledge on the other.  After an Introduction to the theme of the book (Guus Extra and Durk Gorter), Part I deals with official state languages with a focus on the spread of English as lingua franca across Europe (Juliane House), on French and France (Dennis Ager), on Polish in Poland and abroad (Justyna Lesniewka), and on language constellations in the Baltic States (Gabrielle Hogan-Brun). Part II deals with regional minority languages with a focus on Catalan in Spain (Francesc Xavier Vila i Moreno), Frisian in the Netherlands (Durk Gorter et al.), Hungarian as a minority language in Central Europe (Susan Gal), and Saami in the Nordic countries (Mikael Svonni). Part III deals with immigrant minority languages in the United Kingdom (Viv Edwards), Sweden (Lilian Nygren-Junkin), Italy (Monica Barni and Carla Bagna) and Europe at large (Guus Extra and Kutlay Yamur).

Multilingual Europe. Facts and policies. Contributions to the sociology of language 96.