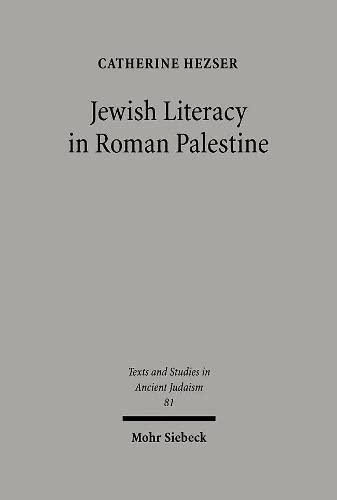 Since Judaism has always been seen as the quintessential 'religion of the book', a high literacy rate amongst ancient Jews has usually been taken for granted. Catherine Hezser presents the first critical analysis of the various aspects of ancient Jewish literacy on the basis of all of the literary, epigraphic, and papyrological material published so far. Thereby she takes into consideration the analogies in Graeco-Roman culture and models and theories developed in the social sciences. Rather than trying to determine the exact literacy rate amongst ancient Jews, she examines the various types, social contexts, and functions of writing and the relationship between writing and oral forms of discourse. Following recent social-anthropological approaches to literacy, the guiding question is: who used what type of writing for which purpose? First Catherine Hezser examines the conditions which would enable or prevent the spread of literacy, such as education and schools, the availability and costs of writing materials, religious interest in writing and books, the existence of archives and libraries, and the question of multilingualism. Afterwards she looks at the different types of writing, such as letters, documents, miscellaneous notes, inscriptions and graffiti, and literary and magical texts until she finally draws conclusions about the ways in which the various sectors of the populace were able to participate in a literate society.

Catherine Hezser, Born 1960; 1986 Dr. theol. at the University of Heidelberg; 1992 Ph.D. at the Jewish Theological Seminary New York; 1997 Habilitation at the Free University Berlin; Professor of Jewish Studies at the School of Oriental and African Studies (SOAS), University of London.

Book Description Mohr Siebeck, 2001. Condition: Good. A+ Customer service! Satisfaction Guaranteed! Book is in Used-Good condition. Pages and cover are clean and intact. Used items may not include supplementary materials such as CDs or access codes. May show signs of minor shelf wear and contain limited notes and highlighting. Seller Inventory # 3161475461-2-4