Items related to Plant Protoplasts and Genetic Engineering I (Biotechnology...

Plant Protoplasts and Genetic Engineering I (Biotechnology in Agriculture and Forestry) 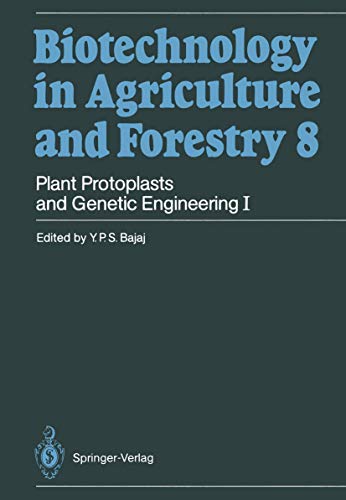 Isolated protoplasts are a unique tool for genetic manipulation of plants. Since the discovery of a method for the enzymatic isolation of pro-· toplasts by Professor E. C. Cocking in 1960, tremendous progress has been made in this very fascinating area of research. I have witnessed the struggle in the 1960's and early 1970's, when obtaining a clean prepara­ tion of protoplasts was considered an achievement. I also shared the pioneering excitement and enthusiasm in this field during the 2nd Inter­ national Congress of Plant Tissue Culture held at Strasbourg in 1970, where Dr. I. Thkebe of Japan presented his work on the induction of division in tobacco protoplasts. This was followed by my participation in three international conferences devoted to plant protoplasts held in 1972 in Salamanca (Spain) and Versailles (France), and then in 1975 in Nottingham (England). The enthusiasm shown by plant scientists at these meetings was ample proof of the bright future of protoplast technology, and it became evident that protoplasts would playa major role in plant biotechnology, especially in genetic engineering. Since then we have never looked back, and now the methods for isolation, fusion, and culture, as well as regeneration of somatic hybrids, have become routine laboratory procedures for most plant species. Currently the focus is on cereal and tree protoplasts. In order to bring about any genetic manipulation through fusion, in­ corporation of DNA, and transformation, the regeneration of the entire plant through manipulation of protoplasts is a prerequisite.

Buy Used
Condition: As New
LIKE NEW Learn more about this copy

1. Plant Protoplasts and Genetic Engineering I (Biotechnology in Agriculture and Forestry)

Shipping: US$ 5.17
From United Kingdom to U.S.A.
Destination, rates & speeds