Items related to ICANN 98: Proceedings of the 8th International Conference... 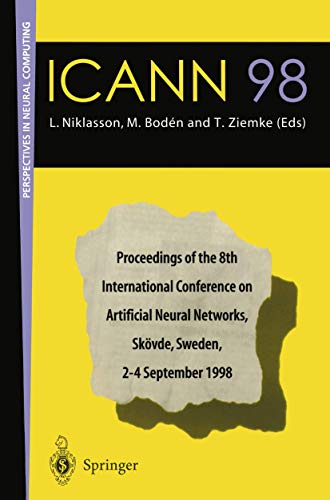 ICANN, the International Conference on Artificial Neural Networks, is the official conference series of the European Neural Network Society which started in Helsinki in 1991. Since then ICANN has taken place in Brighton, Amsterdam, Sorrento, Paris, Bochum and Lausanne, and has become Europe's major meeting in the field of neural networks. This book contains the proceedings of ICANN 98, held 2-4 September 1998 in Skovde, Sweden. Of 340 submissions to ICANN 98, 180 were accepted for publication and presentation at the conference. In addition, this book contains seven invited papers presented at the conference. A conference of this size is obviously not organized by three individuals alone. We therefore would like to thank the following people and organizations for supporting ICANN 98 in one way or another: · the European Neural Network Society and the Swedish Neural Network Society for their active support in the organization of this conference, · the Programme Committee and all reviewers for the hard and timely work that was required to produce more than 900 reviews during April 1998, · the Steering Committee which met in Skovde in May 1998 for the final selection of papers and the preparation of the conference program, · the other Module Chairs: Bengt Asker (Industry and Research), Harald Brandt (Applications), Anders Lansner (Computational Neuroscience and Brain Theory), Thorsteinn Rognvaldsson (Theory), Noel Sharkey (co­ chair Autonomous Robotics and Adaptive Behavior), Bertil Svensson (Hardware and Implementations), · the conference secretary, Leila Khammari, and the rest of the