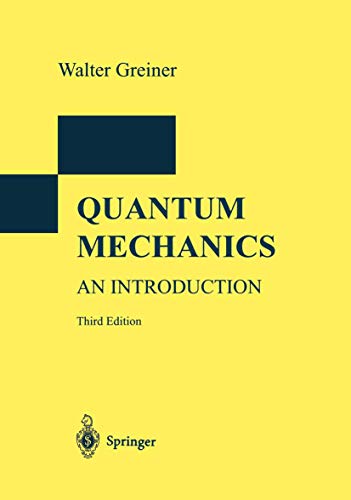 The text Quantum Mechanics - An Introduction has found many friends among physics students and researchers so that the need for a third edition has arisen. There was no need for a major revision of the text but I have taken the opportunity to make several amendments and improvements. A number of misprints and minor errors have been corrected and a few clarifying remarks have been added at various places. A few figures have been added or revised, in particular the three-dimensional density plots in Chap. 9. I am grateful to several colleagues for helpful comments, in particular to Prof. R.A. King (Calgary) who supplied a comprehensive list of corrections. I also thank Dr. A. Scherdin for help with the figures and Dr. R. Mattiello who has supervised the preparation of the third edition of the book. Furthermore I acknowledge the agreeable collaboration with Dr. H. 1. Kolsch and his team at Springer-Verlag, Heidelberg.

Quantum Mechanics - An Introduction lays the foundations for the rest of the course on advanced quantum mechanics and field theory. Starting from black-body radiation, the photoelectric effect, and wave-particle duality, Greiner goes on to discuss the uncertainty relations, spin, and many-body systems; he includes applications to the hydrogen atom and the Stern-Gerlach and Einstein-de Haas experiments. The mathematics of representation theory, S matrices, perturbation theory, eigenvalue problems, and hypergeometric differential equations are presented in detail, with 84 fully and carefully worked examples and exercises to consolidate the material. This fourth edition has been revised and makes the book up-to-date again.

Book Description Springer 1997-05-01, 1997. Paperback. Condition: Very Good. Item is in very good condition. If supplemental codes/CDs for textbooks are required please contact us prior to purchasing as they may be missing. Photos are stock pictures and not of the actual item. Seller Inventory # DS-3540780459-2