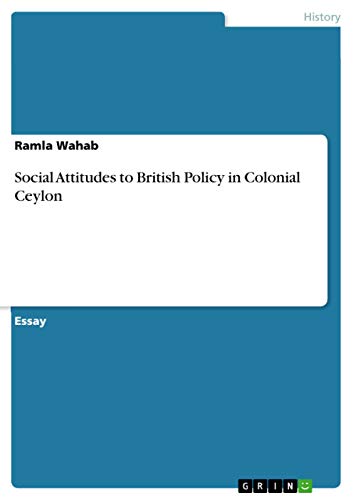 Essay from the year 2011 in the subject History - Asia, , language: English, abstract: I have attempted to conduct a study of the attitudes of the Ceylonese locals to the British colonial regime which lasted from (1815- 1948). I have conducted this research on my own by researching into commonly told stories and jokes about the white man who ruled Ceylon. Picking up on stories shared by locals about the other, the most interesting part of my paper lays in reconstructing what the Ceylonese would have really thought of their white masters. I have also paid particular attention to certain aspects of the British regime which left the country rife for internal conflict post independence. The issue of the Tamils in Ceylon and the unfair status bestowed on them causing communal hostilities began in the British era through the policy of divide and rule.