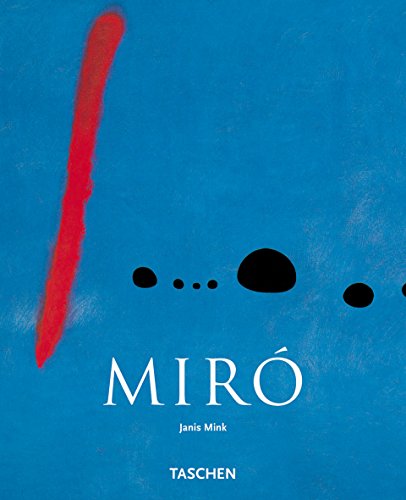 Miró's world of forms resembling shorthand symbols   Joan Miró (1893-1983) is one of the most significant Spanish painters of the twentieth century. His early work clearly shows the influence of Fauvism and Cubism. The Catalan landscape also shapes the themes and treatment of these initial works. In his travels, Miró encountered the intellectual avant-garde of his time. His friends included Francis Picabia, Tristan Tzara, André Masson, Jean Arp and Pablo Picasso.

From the mid-twenties onward, Miró strove to leave direct objective references behind and developed the pictograms that typify his style. The pictures of this period, which include perhaps the most beautiful and significant ones of his whole oeuvre, dispense with spatiality and an unambiguous reference to objects. From now on, the surfaces are defined by numerals, writing, abstract emblems, and playful figures and creatures.

This title in the Modern Masters series focuses on the work of Joan Miro, one of the painters most often associated with surrealism. Miro studied art in his native Barcelona before joining the Paris art scene in the 1920s. Fantasy, dreams, and myths played an important role in Miro's early works, many of which are included in the more than 70 full-color reproductions of paintings, sculptures, and tapestries in this collection. This is a fine introduction to the monumental works of one of the foremost artists of the 20th century.

Janis Mink studied art history at Smith College and gained her doctorate in Hamburg under Martin Warnke. She is presently a writer and curator.