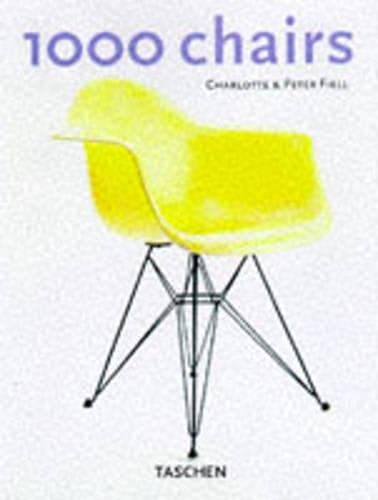 Sleek, stuffed, buttoned, or bent, in the den or the dining room, the chair is an indicator of its owner's identity. Chairs make up much of the interior landscape of our homes and workplaces, and a comfortable chair is considered a great asset in either location. A rigorous survey of the last 150 years of chairs, 1000 Chairs is a pictorial guide to the axiom "you are where you sit." Writers Charlotte and Peter Fiell argue that, as well as being an icon of identity, the chair is a form through which designers engage in social, political, and even ergonomic rhetoric. A good example is George Nelson's mass-produced modular seating system. Geometrical in design, its austere, mostly rectilinear lines are efficient and economical. The book follows developments and mutations in chair design from the days before art deco through the rise of modernity and into the mid-'90s, when designers like Philippe Starck used such materials as recycled plastic and injection molded polypropylene.

In total there are more than the 1000 advertised illustrations, and each is accompanied by a small text describing the significance of the chair and its designer. The book includes more than 100 capsule biographies of such designers as Charles Rennie Mackintosh, Adolph Loos, and Marcel Breuer. The only problem with 1000 Chairs is, ironically, its own ergonomics. At about eight by six inches and nearly 800 pages, it is an unwieldy little tome. That aside, this is a great book--a must for anyone interested in sitting down. --Loren E. Baldwin