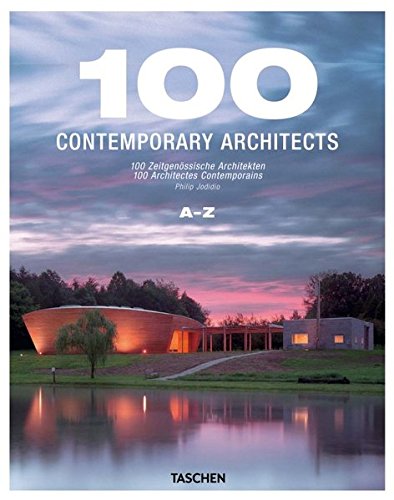 Architecture at the dawn of the 21st century: the indispensable compendium This two-volume compilation brings together highlights from TASCHEN's groundbreaking title Building a New Millennium and the first four volumes of our renowned Architecture Now! books for a comprehensive study of architecture around the world at the beginning of the 21st century. Up-and-coming architects?tomorrow's superstars?are featured alongside the field's most respected practitioners, such as Santiago Calatrava, Herzog & de Meuron, Koolhaas/OMA, Daniel Libeskind, Richard Meier, Oscar Niemeyer, and Jean Nouvel.

Here are just a few of the projects that are featured in the new book:

· A shelter for the needy made out of sandbags · "Nomadic Museum" made by Shigeru Ban out of shipping containers · A tree house in Germany · Extraordinary museums that will never be built in Lausanne and Guadalajara · New Museums that have been built by Gehry, Mansilla and Tuñón, or Richard Meier · BMW Central Building in Leipzig by Zaha Hadid · Allianz Arena by Herzog & de Meuron · Wedding Chapel in Japan · Design hotels in Berlin and Saõ Paulo or Cerro Paranal, Chile · Library in Seattle by Rem Koolhaas/OMA · Houses in Mexico City, Saõ Paulo, Corsica, Hiroshima, or Great Mackerel Beach, Australia · Spoon des Neiges by Patrick Jouin · A tower that will grow like a tree in New York · With-it architects like David Adjaye, Caramel, Graftlab, Jakob +MacFarlane, Asymptote or Lewis Tsurumaki Lewis · Artists who take on architectural space like Frank Stella or Bill Viola, or architects who are interested in art like Peter Eisenman · The E-House, architecture that is greener than green · From the Minimal (David Chipperfield and John Pawson) to the decidedly exotic (Longitude 131, Uluru-Kata National Park, Northern Territory, Australia)

Philip Jodidio (born 1954) studied art history and economics at Harvard University, and was editor-in-chief of the leading French art journal Connaissance des Arts for over two decades. He has published numerous articles and books on contemporary architecture, including TASCHEN's Architecture Now! series, Building a New Millennium, and monographs on Tadao Ando, Renzo Piano, Santiago Calatrava, Norman Foster, Richard Meier, and Alvaro Siza, and is internationally recognized as one of the most popular writers on the subject of architecture.

Shipping: US$ 4.40
From United Kingdom to U.S.A.
Destination, rates & speeds