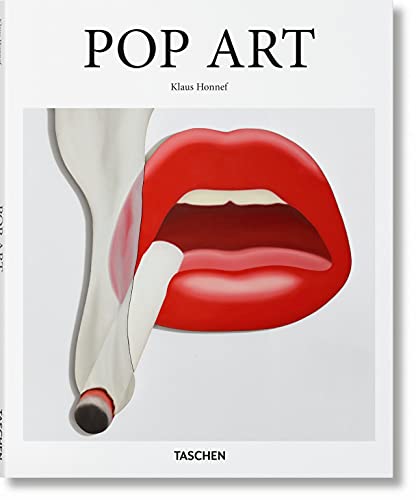 Peaking in the 1960s, Pop Art began as a revolt against mainstream approaches to art and culture and evolved into a wholesale interrogation of modern society, consumer culture, the role of the artist, and of what constituted an artwork.

Focusing on issues of materialism, celebrity, and media, Pop Art drew on mass-market sources, from advertising imagery to comic books, from Hollywood's most famous faces to the packaging of consumer products, the latter epitomized by Andy Warhol's Campbell's soup cans. As well as challenging the establishment with the elevation of such popular, banal, and kitschy images, Pop Art also deployed methods of mass-production, reducing the role of the individual artist with mechanized techniques such as screen printing.

Klaus Honnef was honorary professor of photography theory at the Kassel Art Academy. He was one of the organizers of documenta 5 and documenta 6 in Kassel, and has been the curator of more than 500 exhibitions in Germany and abroad. He has written numerous books, including TASCHEN’s Contemporary Art, Andy Warhol, and Pop Art.

Book Description Condition: New. Pop artists of the 1960s, heralded by the Great Andy Warhol, commented on everything from mainstream media to consumer society to advertising to product packaging with colorful and often comical works. Pop Art's influence on contemporary art and culture remains prominent today. Nowhere else can you find so much Pop Art in such a stylish book! Num Pages: 96 pages, illustrations. BIC Classification: ACXJ1. Category: (G) General (US: Trade). Dimension: 269 x 217 x 14. Weight in Grams: 562. 2015. Hardcover. . . . . Books ship from the US and Ireland. Seller Inventory # 9783836523370

Shipping: US$ 41.32
From United Kingdom to U.S.A.
Destination, rates & speeds