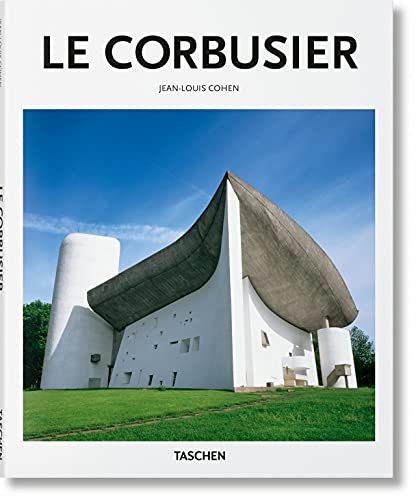 Born Charles-Édouard Jeanneret, Le Corbusier (1887–1965) is widely acclaimed as the most influential architect of the 20th century. From private villas to mass social housing projects, his radical ideas, designs, and writings presented a whole-scale reinvention not only of individual structures, but of entire concepts of modern living.

Le Corbusier’s work made distinct developments over the years, from early vernacular houses in Switzerland through dazzling white, purist villas to dynamic syntheses of art and architecture such as the chapel at Ronchamp and the civic buildings in Chandigarh, India. A hallmark throughout was his ability to combine functionalist aspirations with a strong sense of expressionism, as well as a broader and empathetic understanding of urban planning. He was a founding member of the Congrès international d’architecture moderne (CIAM), which championed “architecture as a social art.”

This book presents some of Le Corbusier’s landmark projects to introduce an architect, thinker, and modern pioneer who, even in his unrealized projects, offered discussion and inspiration for generations to come.

Basic Architecture features:
· Each title contains approximately 120 images, including photographs, sketches, drawings, and floor plans
· Introductory essays explore the architect’s life and work, touching on family and background as well as collaborations with other architects
· The body presents the most important works in chronological order, with descriptions of client and/or architect wishes, construction problems (why some projects were never executed), and resolutions
· The appendix includes a list of complete or selected works, biography, bibliography and a map indicating the locations of the architect’s most famous buildings

In 1997, the French Minister of Culture appointed Jean-Louis Cohen to create the Cité de l’architecture―a museum, research, and exhibition center in Paris’s Palais de Chaillot. Cohen’s research has focused principally on 20th-century architecture and urban planning, and his studies on German and Soviet architectural cultures. The author and curator of numerous books and exhibitions on architecture, he is an internationally acknowledged authority on Le Corbusier’s work.

Peter Gössel runs an agency for museum and exhibition design. He has published TASCHEN monographs on Julius Shulman, R. M. Schindler, John Lautner, and Richard Neutra, as well as several titles in the Basic Architecture series.