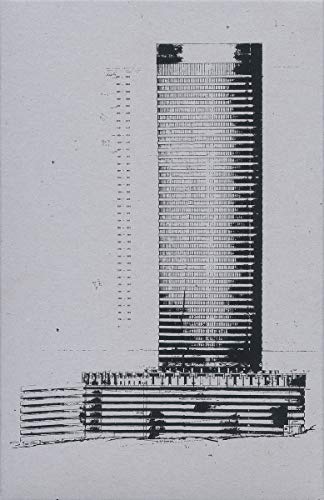 Mikhael Subotzky and Patrick Waterhouse worked at Ponte City, the iconic Johannesburg apartment building which is Africa's tallest residential skyscraper, for more than six years. They photographed the residents and documented the building-every door, the view from every window, the image on every television screen. This remarkable body of images is presented here in counterpoint with an extensive archive of found material and historical documents. The visual story is integrated with a sustained sequence of essays and documentary texts. In the essays, some of South Africa's leading scholars and writers explore Ponte City's unique place in Johannesburg and in the imagination of its citizens. What emerges is a complex portrait of a place shaped by contending projections, a single, unavoidable building seen as refuge and monstrosity, dreamland and dystopia, a lightning rod for a society's hopes and fears, and always a beacon to navigate by. This long-term project obtained the Discovery Award at Les Rencontres d'Arles in 2011.

Juxtapoz was lucky enough to visit the Ponte City construction site in Johannesburg, South Africa with Magnum photographer Mikhael Subotzky back in 2008 as he began what would become this book collection―scratch that, this is so much more than a book: it’s an immersive archival box set of found documents, photography, essays, truly a visual history of what publishing house Steidl calls both a “ dreamland and dystopia.” (The Editors Juxtapoz)

Ponte City documents the checkered history of Africa’s tallest residential high-rise through an array of photographic materials and texts ―including the artists’ photographs of the building, its inhabitants, found ephemera, and archival publicity materials―within a hardbound volume and a series of 17 small individual saddle-stitched paperback supplementary booklets designed to be inserted by the reader―and to expound on specific content―at various points in the main hardbound edition. (Phil Bicker TIME Lightbox)

This beautiful box set about Ponte City, Africa’s tallest residential building and a symbol of urban blight in Johannesburg, is a compilation of one large volume and 17 smaller booklets, which, like the floors of the apartment building itself, are stacked one on top of another. The narratives in these zine-like books veer from the personal to the more scholarly, but the photographs are the thread that sews together all the disparate strands to this project. You may not quite be sure what to think about this “book” (if you can even call it that), but Subotzsky and Waterhouse have created an enthralling storytelling device that echoes the difficulty of its subject matter almost too well. The most haunting booklet is titled Out the Windows, and it documents all the things that are hurled (or jump) out of the windows of the apartment block. (Hrag Vartanian Hyperallergic)

Already held in high regard by the photo community, Ponte City has recently been announced as one of the four projects shortlisted for next year’s Deutsche Borse photography award.

Back in pre-apartheid Johannesburg, 1975, a massive 54-storey apartment block was built as testament to the white supremacy of the time, to house the white “sophisticates” in a kind of utopian dreamland. In the 1990s Ponte City, as it was called, became a sanctuary for immigrants from all over Africa, gradually falling into decay and becoming a centre for drug dealing and prostitution. At one point it was known as “suicide central”. In 2007 Subotzky and Waterhouse began documenting the building, which had suffered in the economic downturn. Subotzky and Waterhouse focused on Ponte City’s residents. Over the past seven years they have built an intimacy with the now middle class families, students and, for the first time, even a handful of white residents. Their mammoth project sees them photographing every door and every view from every single window in the building. (Cheryl Newman Dirty Books)

A multi-part book about a 54-story residential building in Johannesburg that Mikhael Subotzky describes as, "a huge blinking advertising crown visible from Soweto in the south to Sandton in the north." Built in 1976, "Ponte City" housed young professional types before falling on hard times in '90s, as those people fled to the suburbs. Developers who bought the building in 2008 with grand plans to refurbish it went belly-up. Subotzky and Waterhouse's book-in-a-box includes a standard hardcover photobook along with 17 pamphlet/zine type booklets, each focusing on a different aspect of the building. It's an audacious deep-dive into Ponte City that traces its history through archival documents and photographs of those who live there. (Mark Murrmann Mother Jones)

Ponte City is an epic project that has resulted in a superb book. The vast amount of material the authors collected of many years of the life inside this fifty-four-storey building that dominates Johannesburg's skyline made the process of filtering and conceptualizing it very challenging, but was realized thanks to cohesive design. A very important history made with strenuous dedication. (Laia Abril Photo-Eye Blog)

Mikhael Subotzky (b. 1981, South Africa) and Patrick Waterhouse (b. 1981, UK) for their publication Ponte City (Steidl, 2014). The 54-floor apartment block in Johannesburg was built in 1975 for white “sophisticates” under the apartheid and white supremacy regime. During the political transition in the 1990s, it became a refuge for black newcomers and immigrants from all over Africa before decline and neglect led to it being positioned as the prime symbol of urban decay in the city and the epicentre of crime, prostitution and drug dealing. Subotzky and Waterhouse began their project in 2007 working with the remaining residents, after a regeneration project failed. They have created an intimate and deeply evocative social portrait of a culture, building and its community of residents through photographs, architectural plans, and other archival and historical material. An additional sequence of seventeen booklets containing essays and personal stories complete the visual and spatial narrative of this Johannesburg landmark. (The Editors Deutsche Börse Group)

Ponte City definitely is a photobook that deserves to be widely seen and carefully looked at, however much it makes exactly that harder than it maybe should have. Its presentation certainly is a very valid strategy to deal with a vast cache of material that will suffer when you reduce it down to something smaller, a vast cache of material that will offer a lot more with a lot less.

The box will undoubtedly appeal to those who value a well-produced smorgasbord (as, I’ll admit, I do). Steidl, the publisher, for sure knows how to produce a photobook. (The Editors cphmag.com)

A collection of images of Ponte City, an enormous apartment complex in Johannesburg, South Africa. An exhaustive visual, historical and analytical examination of every resident, every doorway, and conceivable angle of the largest residential building in Africa. (Phil Bicker TIME Lightbox)