Items related to The Geography of Anasias of Sirak: The Long and the...

Hewsen, Robert H The Geography of Anasias of Sirak: The Long and the Short Recension. Introduction, Translation and Commentary (Reihe B (Geisteswissenschaften))

The Geography of Anasias of Sirak: The Long and the Short Recension. Introduction, Translation and Commentary (Reihe B (Geisteswissenschaften)) 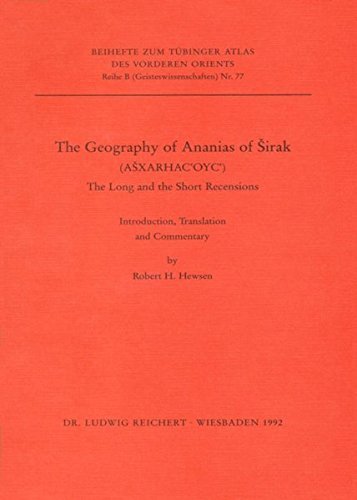 The anonymous Armenian "Geography," now attributed to Ananias of Shirak, is one of the most valuable works to come down to us from Armenian antiquity. Besides being our chief authority for the historical geography of Armenia, it is an indispensible handbook of research into the history, geography, and literature of the rest of Caucasia, and especially of the Persian Empire for which it gives the only detailed description made prior to the Islamic period. Based largely on Greek sources augmented by invaluable local information, the "Geography" is also useful for students of the classical world, and may be profitably used in the study of Ptolemy's "Geography," whose influence has been especially strong. The most important source for the text, however, seems to have been the 4th century mathematician and geometer Pappus of Alexandria, and again, the Armenian compilation is of the greatest interest, for the geographical work of Pappus has not survived.The "Geography" has come down to us in two versions, a long and a short one. This publication not only represents the first translation into English of either version, but it is the first time both have been published on facing pages so that the two recensions may be compared. Fifteen of the best and oldest manuscripts of the short version werde consulted for the translation, while the translation of the long version was made upon the first examination of the unique Venetian manuscript in over 110 years. The translations are accompanied by a detailed introduction, ten appendices nad nearly 1,600 notes that open up the vast riches of scholarship previously found only in the Armenian and Russian languages. The work is completed with 26 maps, an exhaustive bibliography and index.

1. Geography of Anasias of Sirak

2. The Geography of Anasias of Sirak: The Long and the Short Recension. Introduction, Translation and Commentary