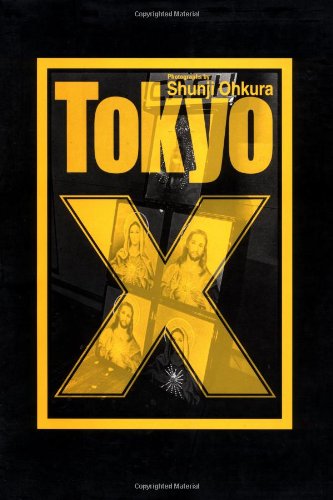 Tokyo--exciting, flamboyant -- is much, much more than that. It is nothing less than a monstrous hellhole inhabited by the most alienated people on the face of the earth. It is this city of eviscerated, hollow men and women that has been so unforgettably captured in the powerful photography of Tokyo X. Here, Tokyo, which the afterword declares to be the handiwork of "a demon-like ruler whose power is so vast that it envelopes the entire planet and transcends all human understanding and religion," is seen as the unfortunate future brought into an unprepared present.

This is the world that Tarkovsky borrowed for the alien capital in "Solaris" and the location of Ridley Scott's "Blade Runner." It is the scene for Katsuhiro Otomo's "Akira." It is what perhaps awaits all mankind. This is the conclusion, after reading Tokyo X, that one is forced to draw.

Shunji Ohkura, famous for his photography of Kabuki, fashion, and insects, was so moved by the plight of Tokyo in the 1990s that he forced himself to record the carnage in the 251 scenes revealed in this book. The photos, seemingly randomly arranged, in fact constitute a linked series of visual poems that resonate and reverberate throughout the mind until the dark shroud covering the city of Tokyo seems to cloud the whole of one's vision. Tokyo X must be seen to be believed.

A resident of Tokyo, photographer Shunji Ohkura specializes in fashion, cooking, insects, ikebana, drama (Kabuki Today), and theater posters. He received the Kodansha Publications Cultural Award in 1971 and the Annual Award of the Photographic Society in 1987.

"... a wake-up call for everyone in Japan: Where is this society going?" -- Paul Murray, Daily Yomiuri

"Tokyo ... is seen in literal black and white, posed at the cusp of the apocalypse." -- Donald Richie, The Japan Times