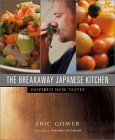 Edamame Mint Pesto with almonds and garlic is an aromatic and satisfying departure from the usual basil. Tofu Salmon Mousse, lightly flavored with walnuts, is a smooth, rich-tasting spread for thinly-sliced toast and perfect for a Sunday brunch. Scallops with Miso, Ginger, and Ruby Grapefruit is an unforgettable blend of flavors, with citrus offsetting the deeper miso.

Many of the dishes can be made in ten minutes, and can be paired with a salad and bread to make a meal.

While incorporating Asian ingredients, the author tailors the recipes directly to American kitchens, and frequently offers suggestions for substitutions, such as fresh tarragon in place of shiso seeds.

Eric Gower is a writer and private chef. He divides his time between San Francisco and Kamakura, Japan

The food is beautifully photographed by Fumihiko Watanabe, photographer of Nobu: The Cookbook, which was nominated for the 2002 James Beard award for best food photography.

"Japanese and fusion are two cuisines that make me nervous. One is daunting and the other usually a disaster. But the best new book I've cooked from in months dabbles in both-and nothing is lost in translation.... A mad-scientist approach...amazing...gorgeously photographed.... Gower borrows concepts and tastes to produce Western food with just enough Eastern exoticism...lively...a wonderment...borders on brilliant...At a time when originality seems to be the missing ingredient in far too many cookbooks, The Breakaway Japanese Kitchen is a good cure for the comfort-food blues." -The Los Angeles Times