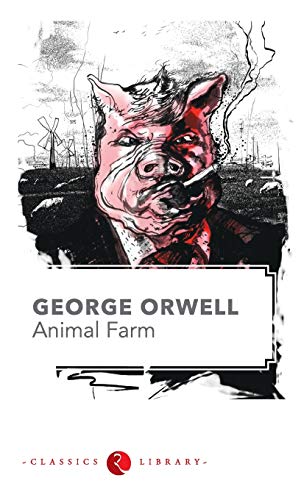 Manor Farm is like any other English farm, expect for a drunken owner, Mr Jones, incompetent workers and oppressed animals. Fed up with the ignorance of their human masters, the animals rise up in rebellion and take over the farm. Led by intellectually superior pigs like Snowball and Napoleon, the animals how to take charge of their destiny and remove the inequities of their lives. But as time passes, the realize that things aren't happening quite as expected. Animal Farmis, one level, a simple story about barnyard animals. On a much deeper level, it is a savage political satire on corrupted ideals, misdirected revolutions and class conflict-themes as valid today as they were sixty years ago.

True Agony of a Socialist Orwell is obviously angry at the way Socialism has been distorted by Stalin. Using Animal characters as symbols Orwell honestly mocks and criticizes the Russian leadership under Lenin. It is a very easy to read book giving good perspectives on the Socialist Revolution. --Abhishek Kona Aug 22, 2011

Animal Farm is a satirical allegory on the Russian Revolution. Orwell explains it, It is the history of revolution that went wrong. It tells the simple and tragic story of what happens when the oppressed farm rebel to attain freedom from Mr. Jones. It is about their attempt to rule the farm themselves on the basis of equality. The animals had initially aimed to form a utopian society, where each would work according to his capacity, respecting the needs of the others. But, they failed to do so. And, Animal Farm ended up being a dictatorship of the pigs that were the brightest, but did no physical work in reality. The main action of the story stands for The Russian Revolution of 1917 and the early years of the Soviet Union. Animalism is a metaphor for Communism. Manor farm is an allegory of Russia, Mr. Jones is Russian C-Zar, Old Major stands for Karl Marx, and Snowball represents Leo Trotsky. Napolean stands for Stalin, while the dogs are the secret police. The horse, Boxer stands for the working class which works constantly for the greater good while Squealer is the propagandist. The novel is skillfully organized and presents the horrors of communism through simple story-telling. It presents what propaganda and brain washing do to the people living under the dictatorship. How the fickle minded people were swayed easily by the pigs, who managed to reverse the seven commandments and reduce them to Four legs good, two legs better . I would recommend this book to everyone above 14 years of age who has some knowledge about communism or a hint of what happened during the Russian Revolution of 1917. The book is gripping as there is always something happening. It ends with the pigs becoming mush like humans and changing the name of the farm back to the Manor Farm . The ending was sad it shows how power turns comrades into tyrannical dictators. --Diksha Mahajan Aug 14, 2012

George Orwell is probably one of the few authors who has more than one book featuring regularly in the all the favorites of most people. In such a short book, we get to experience the entire range of the human emotions - probably characterized by the animals. But, what this book basically makes us realize is the fact that politics is relevant at all times. --Deep Agrawal Mar 2, 2012

Eric Arthur Blair, more widely known as George Orwell, was a British writer. Other books by George Orwell are 1984 Nineteen Eighty Four, Burmese Days, A Clergyman's Daughter, and Coming Up for Air. He wrote fiction and non-fiction. His writing expressed his distaste for despotism and totalitarian regimes, as well as his support for democratic socialism. George Orwell was born in 1903 in India. A year later, his mother Ida Blair moved back to England with her children. Orwell initially studied at a Catholic Convent, but later moved to a boarding school, Cyprian s School. He went to Eton on a scholarship, but did not complete his studies. He joined the Imperial Police and was posted in Burma. He later returned to Europe, and lived in Paris and London, before finally settling down in England. His book, Down and Out in Paris and London, was published under the pen name of George Orwell. In 1945 came Animal Farm, which made him world famous, and his reputation as a great writer was sealed with the publication of Nineteen Eighty Four in 1949, shortly before his death.

Shipping: US$ 2.40
From United Kingdom to U.S.A.
Destination, rates & speeds

Book Description Rupa Publications India Pvt. Ltd, 2015. Softcover. Condition: New. Summary Of The Book There is no turning back once the war trumpet has been the sounded. The animals at Manor Farm have declared war on their drunken and irresponsible owner Mr. Jones, and have secured the farm for themselves after successfully driving out all the humans. It all began when Old Major, the old prize boar on Manor Farm, had a dream in which animals live in a utopian world without the tyranny of man. Inspired by Old Majorâ s rhetoric and an old song â Beasts of Englandâ , taught to them by Old Major, the animals revolt against the tyranny of their human masters. Once the animals take over the farm, they expect things to get better for their kind, and emphatically declare all animals to be equal. Does the utopian dream of Old Major live up to the animalsâ expectations or are they in for a dystopian awakening as things take on an altogether different turn? Do Snowball and Napoleon manage to bring order to the chaotic situation following the revolution? Now that the humans have been banished from Manor Farm, what new evil lurks round the corner, waiting to possess the innocent farm animals? Animal Farm is a straightforward tale of a remarkable revolution in the animal world. However, on a deeper level it is a political satire of the cruel man-made ideologies of class divisions and the subsequent class struggles involved. A radio version of the novella was broadcast on BBC Radio in January 1947. Animal Farm has also been adapted to film twice, as an animated feature in 1954 and later as a TV live action version in 1999. A theatrical version of Animal Farm was staged in London in 1984, followed by a tour of nine cities in 1985. Guy Mastersonâ s solo version that premiered at the Traverse Theatre Edinburgh in 1995 has been touring the world since. Printed Pages: 120. 12 x 18 cm. Seller Inventory # 98259