Items related to Repertory Mini (Repertory of the Homeopathic Materia... 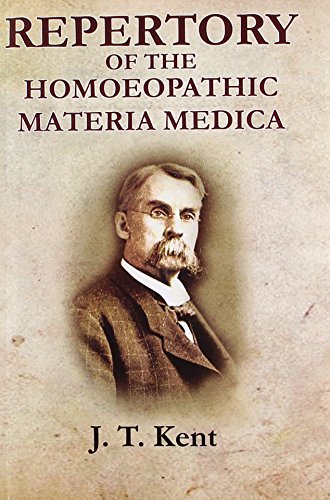 Product Dimensions: 18x12x3 cm.: A repertory which is used by every homoeopath.Based on the original provings and information gathered till that time.Includes the art of repertorizing

James Tyler Kent, A.M., Chicago, Illinois, Professor of Meteria Medica in Hahnemann Medical College, Chicago physician and author of several valuable medical works, is a native of the town of Woodhull, Steuben country, New York, born in 1849, son of Stephen Kent and Caroline Tyler, his wife. His elementary and secondary education was acquired in Franklin Academy, Prattsburg, and his higher education in Madison (now Colgate) University, Hamilton, New York, where he came to his degree, Ph.B., in 1868; A.M., 1870. He was educated in medicine in the Eclectic Medical Institute, Cincinnati, Ohio, graduating there in 1871, and the Homoeopathic Medical College of Missouri, St. Louis, where he was awarded the diploma of that institution in 1889. Dr. Kent began his professional career in St. Louis as a Physician of the eclectic school at the same time being actively connected with several eclectic journals in the capacity of writer and also took an earnest part in the councils of the Eclectic National College, St. Louis, 1877-78, about which time his attention was forcibly directed to homoeopathy, through the serious illness of his wife, whose case refused to yield to the treatment either of his own eclectic or the allopathic school practitioners, but was subdued by homoeopathic treatment. Later on he was dean and professor of Materia Medica in the Post-Graduate School of Homoeopathics, Philadelphia, Pennsylvania; dean and professor of material medica in Dunham Medical College, Chicago; dean and professor of material medica inj Hering Medical College, Chicago; and in 1905 he held the same chair in Hahnemann Medical College, Chicago.

3. Repertory of the Homeopathic Materia Medica

4. Repertory of the Homeopathic Materia Medica