Items related to Our Environment 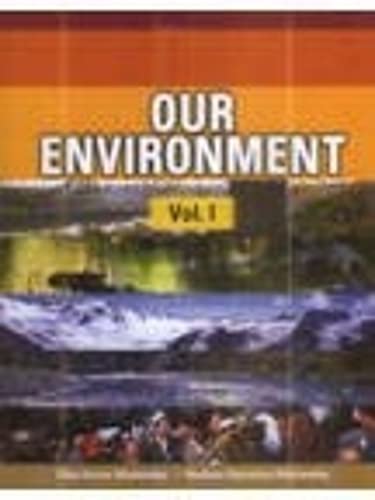 Book Description Hardcover. Condition: New. First edition. The Nature has devised methods to provide clean air, Water and other Natural resources to the human beings. However, the greed of man and his endeavors of unsustainable growth and development have caused an irreparable deterioration in the quality of air, water, Soil and other natural resources. Today the cry of Pollution is heard from, all the nooks and corner of the globe and pollution has become a major threat to the the very existence of mankind on this earth. It is the major challenge of our times. Determination of desirable versus undesirable effects of an environmentally altering activity is very difficult and is a highly controversial process. The nature of tragedy as the philosopher Hegel pointed out long is the conflict not between right and wrong but between right and right. Although finding solution is difficult and controversial, yet it must be attempted to achieve better life. It is heartening to note that a global awareness has been generated about the Environmental pollution. The people all around the world are now pinning their hopes on the matured WISDOM of the Leaders of world who are to congregate at the Earth Summit with a need to examine the global problems and to combat them. The problems of Environments both nationality and globally are massive and formidable. We all know that the Earth Summit is being held in the middle of this year at Riode Janerio (Brazil). The major problems before the Earth Summit are those of climate changes and of biodiversity. Last October, a draft to be presented at the Earth Summit on Biodiversity was prepared. It is remarkable because at no time in human History certainly in the past 250 years, when Industrialization of the world began, there was such a wide speared concern with environmental degradation and need for protection of environmental. And in no time in history did we have sufficient Scientific understanding and technological advancement for restoring the ecological imbalances. At no time, we had the promise, at any rate, of meeting through Science & technology. the very crisis of Environment that science & Technology will generate. The process of globalization, all said and done, is a process of imperious march of late Capitalism throughout the world. This is what Globalization must mean. Globalization the third glorious march of world capitalism the first glorious was the Industrial Revolution the second glorious march was cybernetics & Biotechnology revolution, as we all know the third march what we witness now. On December 23, 1984, a major catastrophe happened at Bhopal. A large volume of deadly MIC escaped, leaving in its wake at least three hundred thousand human beings men, Women and children, permanently exposed to the after effects of this lethal gas. The after effects of MIC in human systems are profound and comprehensive. The bodies of gas victims and their psyche are unfolding, over a period of years new symptoms. The principle was that anybody who develops or uses inherently injurious or hazardous substances, properties, ingredient in any industrial production should be absolutely liable for the damage that is caused. No defense should be available in case of catastrophe. The Indian enunciation of the principle was, there-fore, very important. In the space of eighteen months, we had Bhopal, Chernobyl and sandoz chemicals Warehouse Fire that for several years polluted the River Rie in irremediable manner. The disasters suggest that hazardous substances and processes have an enormous capacity to degrade environment for a considerable number of decades to come. Catastrophes of this kind know no national frontiers. Environmental pollution control cannot be significantly divorced from the question of production or of economic development. This is certainly very Elementary and all of us know it, but we do not ta Printed Pages: 554. Seller Inventory # 37220BV