Items related to Samkhya Darshan/Yogic Perspective on Theories of Realism 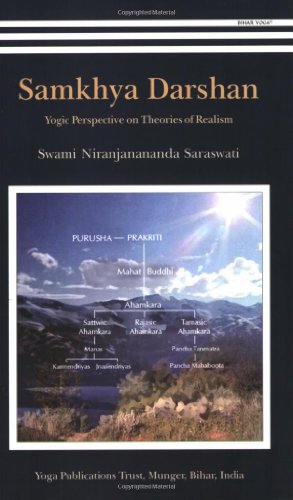 Samkhya is one of the earliest schools of Indian philosophy and most systems,including yoga,have been drawn from or influenced by it.Samkhya is a dualisitic philosphy and postulates two eternal realities:Purusha,the witnessing consciousness,and Prakriti,the root cause of creation,composed of three gunas. This text highlights the unique contribution of Samkhya philospohy in man's quest to understand his true nature.It discusses the pratical theories of causation,manifestation,bondage and liberation.For the spiritual aspirant,Samkhya is the metaphysics of self-realization and yoga is the sadhana or means to achieve it. Samkhya Darshan contains the full Sanskrit text of Ishvara Krishna's Samkhya Karika as well as tranasliteration and translation.

Swami Niranjaananda was born in Madhya Pradesh in 1960 and was initiated into Dashmani sanyasa at the age of ten. From 1971 he travelled overseas for 11 years.In 1983 he was appointed President Bihar School of Yoga.Since then he has guided the development of Ganga Darshan,Sivananda Math,Yoga Publications Trust and the Yoga Research Foundation. In 1990 he was initiated as a paramahansa and in 1993 anointed preceptor in succession to to Swmai Satyananda.Bihar Yoga Bharati was founded under his direction in 1994.He has authored 20 books and guides national and international programmes.

Shipping: US$ 9.02
From United Kingdom to U.S.A.
Destination, rates & speeds