Items related to Gaudi - Of Barcelona 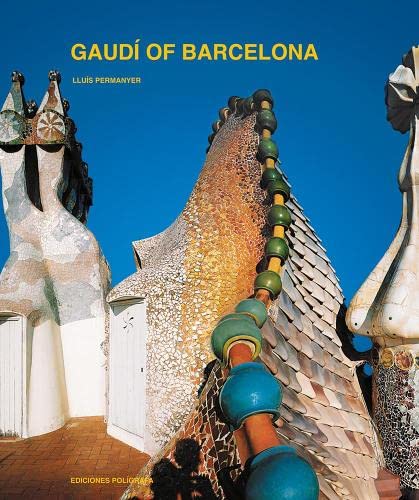 The work of Antoni Gaudí (1852-1926) defines the city of Barcelona like no other. Its art-nouveau-style spires and visionary eccentricities bestow their unique character on the skyline and make the city a point of pilgrimage for fans of Gaudí's inimitable, playful style. Gaudí of Barcelona presents the architect's work in Barcelona as it has never been seen before. Vibrant, specially commissioned photographs present the wonders of the Sagrada Família, Casa Milŕ, and 10 other fantastic creations in Gaudí's home city in unprecedented detail.

Tiled landscape architecture in brilliant colors, organic, plantlike pinnacles and towers, undulating tiled roofs with chimneys and ventilators looming like alien creatuers atop seething buildings--these are the features that distinguish the work of Gaudí and speak of his curious relationship with his city. The text investigates this aspect of Gaudí's work, discussing the architect's life and influences, his status as an outsider ahead of his time, and his leading place in Catalan modernism.

With its 178 brilliant photographs of Gaudí's most compelling works, and 13 maps showing their location--as well as an insightful text introducing Gaudí's architectural genius--this is an essential book for anyone who knows and loves Gaudí's work, or for those planning to discover it firsthand in Barcelona.

Since the late 1800s, Spanish architect Antonio Gaudí's (1852-1926) fanciful buildings have defined Barcelona's cityscape. His playful spires and towers, undulating tiled roofs, and writhing chimneys loom like Dr. Suess creatures atop commercial and apartment buildings alike, and his sculptures are an integral component of many of the city's parks and public spaces. As respected for his technical innovations as for his aesthetic boldness, Gaudí was able to achieve unique, organic, fluid--at times even bizarre--architectural forms that paralleled the stylistic development of art nouveau. The artist's greatest works are brought into dramatic relief against the background of the modern metropolis with 178 specially commissioned color photographs and 13 maps of Barcelona locating Gaudí's works and offering explanatory descriptions of the buildings.

Journalist and writer Lluís Permanyer was born in Barcelona in 1939, and has specialized in chronicling his native city. He has been a full-time reporter of the main daily newspaper La Vanguardia since 1966, and has published more than thirty books, including monographs on Miró, Tŕpies, and Clavé, and historic studies on aspects of Barcelona. He is also author of the opera libretto for Spleen (composed by Xavier Benguerel) which debuted in Barcelona and Frankfurt.

Photographer Melba Levick has had exhibitions of her work in America and Europe, and her pictures have appeared in magazines worldwide. She has published over twenty books, including Rizzoli's Beach Houses from Malibu to Laguna (1994), Casa California (1996), and Reflections on the Pool (1997). She divides her time betwen Paris, Los Angeles, and Spain's Balearic Islands.