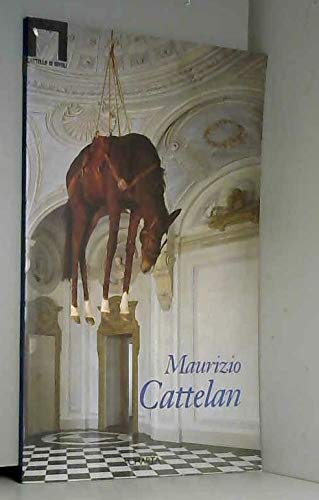 This catalogue documents three installations by Cattelan for the Castello di Rivoli collection. Cattelan is one of today's most important young sculptors.

This comprehensive monograph documents the work of Maurizio Cattelan, the best-known Italian artist to have emerged internationally in the 1990s. His work has featured in three editions of the Venice Biennale (1993; 1997; 1999) and in major venues worldwide, including The Museum of Modern Art, New York (1998); and the Tate Gallery, London (1999). Cattelan creates sculptures that mock the art system and even the artist himself, with considerable wit and audacity. Poking fun at art history (with, for example, a giant, Disneyland-type figure of Pablo Picasso greeting visitors at New York's Museum of Modern Art), monumentality (with a tomb-like, marble epitaph listing all the football matches lost by the England team, exhibited in a prominent London gallery), his native Italy (in a major exhibition celebrating new Italian art, Cattelan created a rug forming a map of his country -inevitably trampled and soiled beneath museum visitors' feet), and often makes fun of himself and his own inability to be responsible, "serious" artist. Part jester, part accuser of the contemporary art world, part thief, Cattelan also conveys a lonely desperation behind the humour and sarcasm in his unconventional works.

A magazine that is a wild photographic odyssey of surrealist misbehavior, shot with a high fashion aesthetic and a mind for turmult, distaste, hilarity, hijinks, and no-holds-barred culture-war mentality. (Christopher Bollen Interview Magazine 2013-01-01)