Items related to The Acting Person: A Contribution to Phenomenological... 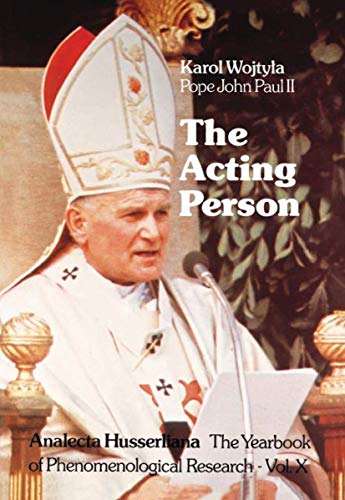 Originally entitled Osoba i Czyn and published in Poland in 1969, TheActing Person is the official English translation and has been thoroughly edited and revised with the collaboration of the author.

The book stresses that Man must ceaselessly unravel his mysteries and strive for a new and more mature expression of his nature. The author sees this expression as an emphasis on the significance of the individual living in community and on the person in the process of performing an action. The author states in his preface that he has tried to face the major issues concerning life, nature, and the existence of Man directly as they present themselves to Man in his struggles to survive while maintaining the dignity of a human being, but who is torn apart between his all too limited condition and his highest aspirations to set himself free.

The author hopes that his book "contributes to this disentangling of the conflicting issues facing Man, which are crucial for Man’s own clarification of his existence and direction of his conduct".

The author’s analysis of the human being is a dynamic counter to the materialistic and positivistic tendencies in various schools of modern philosophy. Ever since Descartes, the knowledge of Man and his world has been identified through cognition. This book is a reversal of the post-Cartesian attitude toward Man in that it characterises him as the person in action.

Audience: The Acting Person will be of great interest to philosophers, anthropologists, and scholars specializing in phenomenology. It will also be of deep concern to theologians, priests, seminarians, and members of religious orders who wish to gain an insight into Pope John Paul II’s philosophy of life.

From the Reviews: "The Acting Person represents a major effort to rethink the human reality in the face of the many frozen assumptions which dominate contemporary thought."
(Professor Benjamin Schwartz, Harvard University)
"This powerful phenomenological study will have lasting impact on those concerned with the contemporary conception of Man."
(Professor Joseph Kockelmans, Pennsylvania State University)
"A masterly critical edition ... its publication is an historical event"
(Professor Kamil Dziewanowski, Boson State University)